With flattened curve, what’s ahead for S. Korean economy? 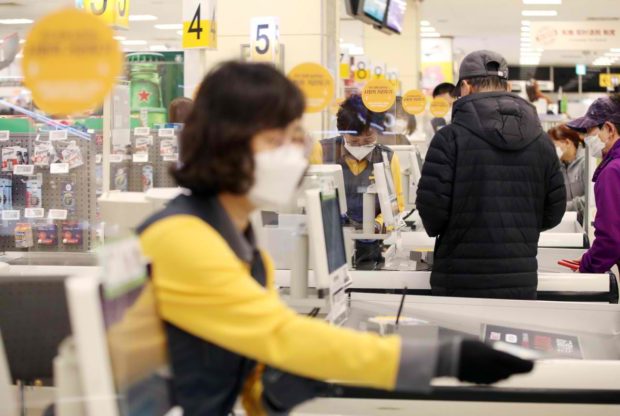 A cashier of E-mart warehouse store in Daegu. Yonhap via The Korea Herald/Asia News Network

SEOUL — The signs of a slowing COVID-19 spread on the back of a strong state drive to contain the novel coronavirus are raising expectations of an early recovery of the South Korean economy. Despite the flattened curve of infection cases, it is premature for excessive optimism on Korea posting a V-shaped recovery, considering its heavy dependence on exports for growth, experts said Wednesday.

“Given that Korea is quite an export-oriented economy, the slumping global demand is expected to hit the country quite hard.” Gareth Leather, senior economist in the emerging Asia team at Capital Economics, told The Korea Herald.

As an exporter of goods such as electronic devices, semiconductors and automobiles, the volume exports slumped by 26.9 percent year-on-year in the first 20 days of April, according to data from the Korea Customs Service, in what “has become the number that was seen during the global financial crisis,” Leather added.

Earlier in April, the UK-based think tank expected the Korean gross domestic product to shrink by 3 percent in 2020.

“Korea is doing well by Asian standards … but exports will be terrible so the economy will still be on a very difficult year,” Leather said.

Recessions across the globe, particularly in China, are weighing on Asia’s fourth-largest economy.

“The recessions in Europe and the United States along with the challenges in restarting China’s economy will continue to weigh on the Korean economy in the form of declining demand for Korean exports,” said Troy Stangarone, senior director and fellow at the Korea Economic Institute.

For the Korean market in specific, health rumors on North Korean leader Kim Jong-un could cause short-term noise, but are unlikely to spill over to the nation’s economic growth.

“(Uncertainties surrounding Kim Jong-un’s health) would create an additional crisis that Korea would have to manage, but should not preclude efforts to continue to contain COVID-19 domestically,” Stangarone said.

“Some international attention would shift to the crisis in North Korea. But COVID-19 would remain the dominate story internationally for its impact on the global economy and lives around the world.”

Miguel Chanco, senior Asia economist at Pantheon Macroeconomics, also said Korea’s steady return to a post-outbreak normal is likely to be a more determinant factor for its economy than the emerging geopolitical uncertainties.

”Market volatility could certainly resume in the coming days and weeks, but whether or not Kim Jong-un’s health is likely to have any ramifications for South Korea’s macroeconomy in the coming months is another thing altogether,“ Chanco said.

The views came amid country-specific growth forecasts of international organizations, taking into account Korea‘s capability to contain the spread of the virus.

For example, the International Monetary Fund expected Korea’s economy to shrink by 1.2 percent. This is in contrast with the US projection of minus 5.9 percent and that European Union of minus 7.5 percent. Neighboring Japan is forecast to contract by 5.2 percent.

This comes in line with a recent remark by Angel Gurria, secretary-general of the Organization for Economic Cooperation and Development, that Korea’s readiness and infrastructure to cope with the coronavirus will contribute to a swift economic recovery.

”There is no division between economy and the war against the virus,” Gurria told Arirang News on Tuesday.