Wall Street dips as global rally eases off the accelerator 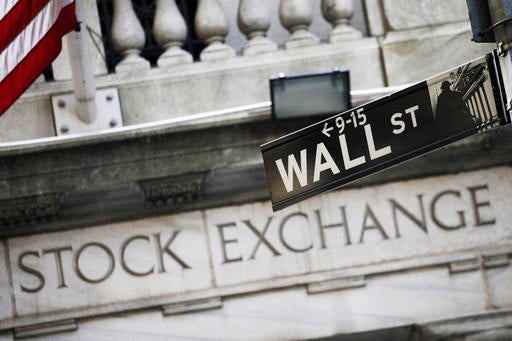 NEW YORK  — Stocks mostly fell in another day of wobbly trading on Wall Street Wednesday, as markets eased off the accelerator following their big rally.

The S&P 500 dipped 0.4% to break a three-day winning streak, after bouncing between small gains and losses for much of the day. Stocks in Asia and Europe made modest gains, while Treasury yields edged lower.

Markets have been trending upward this week amid hopes that the worst of the recession may have already passed, and a worldwide rally on Tuesday carried the S&P 500 back to within 8% of its record. But rising levels of coronavirus infections in several hotspots around the world is also raising concerns that all the improvements could get upended.

Many professional investors have been warning that the S&P 500’s big rally of nearly 40% since late March has been overdone and that volatility is likely the market’s only certainty in upcoming months.

The market began its turnaround following a nearly 34% sell-off in February and March after the Federal Reserve promised massive amounts of aid for the economy. The central bank’s chair told Congress Wednesday that it’s willing to keep interest rates at nearly zero and maintain its emergency lending programs.

But even though recent reports have also shown improvements in U.S. retail sales and employment as businesses reopen, the road back to a full recovery from the coronavirus pandemic will be long and is full of potential setbacks. That stands in sharp contrast to the market’s lightning surge over the last three months.

Consider Norwegian Cruise Line Holdings, whose stock has often led the market — both up and down — as expectations swing about the reopening economy. It had six straight days this month where it rose or fell more than 10%.

It said late Tuesday that it’s cancelling most of its voyages through September. Its shares fell 8.4% for one of the largest losses in the S&P 500.

The chief risk for the market lies in rising infection levels in several hotspots around the world, including Florida, Texas and China. Even if authorities don’t reinstate widespread lockdowns, the worry is that businesses and consumers could get frightened by new waves of infections and pull back on their spending.

Such worries rocked the market last week, sending the S&P 500 down nearly 6% one day, and they’ve continued to hang in the background this week.

“Any indication that there is an increase in a handful of states that have led the charge in reopening does kind of douse the flames a bit for a rally,” said Nela Richardson, investment strategist at Edward Jones. “We saw that last week and we may be seeing that again today, though definitely not the same dramatic swing we saw last week.”

While cruise lines had some of the sharpest losses in the S&P 500, other companies whose profits are closely tied to the strength of the economy were also weak.

Energy companies in the S&P 500 fell 3.3% for the largest loss among the 11 sectors that make up the index. Banks were also laggards, with JPMorgan Chase down 2.5% and Bank of America down 3.1%.

Stocks of smaller companies were weak, which is typical when investors are apprehensive about the economy. The Russell 2000 index of small-cap stocks fell 1.8%.

On the winning side were some home builders after a report showed that construction rebounded following months of sharp declines due to shutdowns caused by the pandemic. D.R. Horton rose 0.9%.

The growth in housing activity, though, was not as strong as economists expected and another sign of the long road to full recovery.

“As a signal for the overall economy, what housing is telling us is despite very low rates it’s going to be a slow rebound to normal,” Richardson said.

Big technology companies made modest moves higher, including a 0.3% rise for Microsoft. Because these are the biggest companies in the S&P 500, their movements have bigger sway on the index and helped to limit the losses.

“This to me is one of the quieter days we’ve had in terms of volatility, so it’s been a little bit refreshing,” said David Chalupnik, head of active domestic portfolio managers for Nuveen.

The yield on the 10-year Treasury fell to 0.72% from 0.75% late Tuesday. It tends to move with investors’ expectations for the economy and inflation.

In Asia, South Korea’s Kospi ticked up 0.1%, and the Hang Seng in Hong Kong rose 0.6%. Japan’s Nikkei 225 fell 0.6% after the government reported the sharpest decline in exports since the 2008 global crisis.