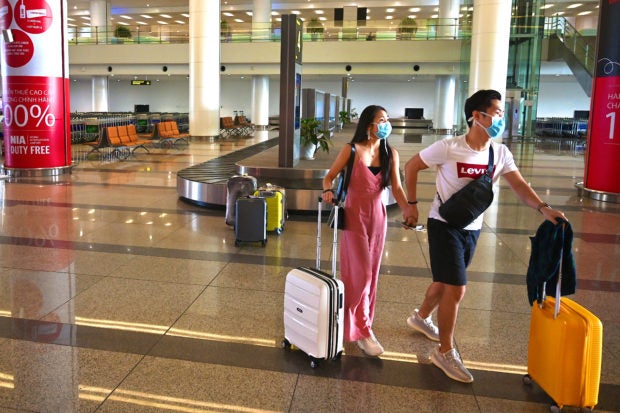 Passengers with protective facemasks walk with their luggage in the empty arrival hall of Noi Bai International Airport in Hanoi on February 27, 2020, as the number of air travellers has plummeted amid fears over the spread of the COVID-19 coronavirus. (Photo by Mladen ANTONOV / AFP)

HANOI — Vietnam’s new immigration law includes a new type of visa for foreigners who come to Vietnam to conduct activities as part of international agreements Vietnam has signed.

The change is expected to facilitate the implementation of new agreements that Vietnam has signed such as the EU-Vietnam Free Trade Agreement (EVFTA) and the EU-Vietnam Investment Protection Agreement (EVIPA), said Colonel Trần Văn Dự, deputy head of the Immigration Department under Ministry of Public Security.

The department last week held a session to explain immigration laws to diplomatic missions and non-governmental organizations (NGOs) in Vietnam.

Vietnam will issue visas with validity from six to 12 months for foreigners who enter to promote services and establish commercial presence according to international agreements.

The amendment to the law on entry, exit, transit and residence of foreigners in Vietnam came into force this month.

“Strategic foreign investors who contribute capital of VNĐ100 billion (US$4.4 million) or more in Vietnam are granted an up-to-five-year visa and temporary residence cards for at most 10 years. This will attract more foreign investment in the country,” Dự said.

The outdated immigration law regulated that all certified foreign investors in Vietnam could obtain a five-year-visa regardless of their investment capital. The new law issues a visa with a duration of at most 12 months and does not grant temporary residence cards to foreign investors that invest less than VNĐ3 billion ($130,400).

The outdated law also required citizens from 13 countries entering Vietnam under the visa waiver scheme to wait for at least 30 days to return and the new law has removed this regulation, creating conditions for foreign visitors to return anytime.

Countries from which citizens do not have to apply for visas to enter Vietnam include Belarus, Denmark, Japan, Norway, Italy, Finland, France, Russia, South Korea, Spain, Sweden, Germany and the UK.

Chika Tsujimoto, head of political section, Japanese Embassy in Vietnam said: “The removal of this regulation will create conditions for Japanese businesspeople to come to Vietnam on short-term trips. Japanese businesspeople have interests in making investment in Vietnam. Vietnam is not only an attractive destination for Japanese investors but also acts as a linkage between Japan and other neighboring countries.”

“I believe that the new immigration law for foreigners will attract not only Japanese investment in Việt Nam but also tourists and students,” she told Vietnam News.

Marko Lovrekovic, managing co-director of Vietnam Union of Friendship Organizations-NGO Resource Centre, said the law on entry, exit, transit and residence of foreigners in Vietnam is important for foreign NGOs as well as the business sector in Vietnam.

“The Vietnamese Government has tried to constantly make amendments. The new law has extended the length and validity of visas and permits, which makes much easier for the implementation of foreign NGOs’ projects,” he said.

Colonel Trần Văn Dự from the Immigration Department said thanks to the two-year e-visa pilot in 2018 and 2019, the number of foreign visitors to Vietnam increased. That’s why the immigration agency decided to extend the list of countries eligible for e-visas to 80 countries.

“We will study to continue to extend the list in the time to come,” Dự said.

“The automated border gates are not new in the world but are definitely new to Việt Nam,” he added.

Foreigners who entered the country under visa waiver programs, e-visas or tourism visas after March 1 will be automatically given stay permit extensions until July 31 free of charge due to the COVID-19 pandemic.

“We will propose the continuous extension depending on practical situations if international flight routes have not been resumed,” Dự said.

Vietnamese citizens from 14 years old can choose to be issued a passport embedded with electronic chips or a passport without electronic chips. The chips contain information of the passport holder and a digital signature of the issuing authority.

Identification cards are one of the necessary documents Vietnamese citizens must submit in case they lose their regular passports overseas and wish to return immediately. They can visit Vietnamese representative offices located overseas to be issued regular passports under shortened procedures, he said.