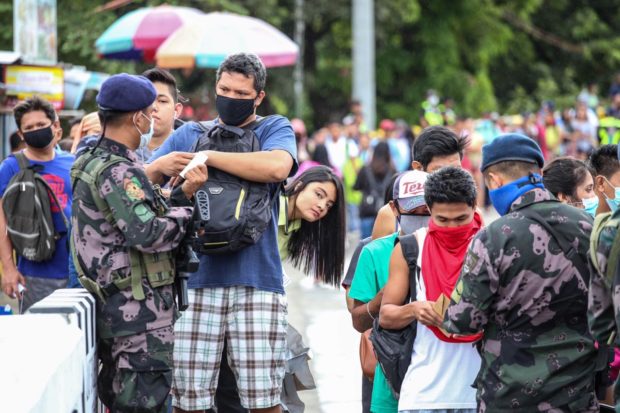 Countries like the Philippines, where COVID-19 cases have yet to make it past through the first wave of infections, needed to be more cautious before further easing restrictions on movement of people, UK-based think tank Oxford Economics said on Friday.

“A prolonged first wave or a second wave is more likely in regions that ease restrictions too quickly,” said Oxford Economics economist John Payne in a report with a long title.

“In Brazil, the US, India and the Philippines, which are still in the middle of a first wave, easing of restrictions risks pushing the peak further out and making the wave bigger,” Payne said.

“The two-stage recovery is poised on a knife-edge,” he said.

At the height of the ECQ, 75 percent of the economy ground to a halt—resulting in millions of job loss and a recession.

With most parts of the country currently under a less-restrictive GCQ, only 25 percent of economic activities are still on hold, while most businesses resumed operations as long as they complied with health and safety standards.

“Risks of a second or prolonged lockdown vary from economy to economy,” Oxford Economics said.

“However, our survey highlighted that Brazil is at particular risk, reflecting the fact that the government has stopped reporting infections and deaths, after previously dismissing the threat from the virus,” it said.

“We are also concerned that a quick easing of restrictions will lead to a renewed spike in infections in India, the Philippines, and the US,” Oxford Economics added.

It said the pressure to put the economy above health was a “clear risk” worldwide.

Here in the Philippines, officials earlier said that health had been given priority over the economy as the government scrambled to establish additional medical and quarantine facilities during the lockdown with the aim of better responding to the pandemic.

While some countries already dismantled their lockdowns, Oxford Economics warned that “a second wave of infections is the key risk.”

“The recent pick-up in COVID-19 cases in some economies has prompted renewed concerns of a second wave of the pandemic,” it said.

“A rise in cases could hit activity either by triggering greater voluntary social distancing, or by the renewed imposition of restrictions on movement at a national or regional level in the worst-affected economies,” Oxford Economics said. “This could push many economies back into recession,” it added.

In a separate report last Wednesday titled “Plotting recovery paths,” Oxford Economics head of India and Southeast Asia economics Priyanka Kishore and economist Thatchinamoorthy Krshnan placed India, the Philippines and Indonesia at the bottom of the pack in the region in its recovery scorecard.

“All three are clearly still struggling to get past the peak of the pandemic, which is a major headwind to their outlooks,” they said.

“At the same time, the fiscal policy response has been quite meager in both India and Philippines, especially compared to the stringency of lockdowns they had imposed—which at one point were not only among the most severe in Asia but also globally,” Oxford Economics said.

The latest update to the Manila-based multilateral lender Asian Development Bank’s (ADB) COVID-19 policy database showed that the Philippines’ war chest against the pandemic stayed at $20.078 billion as of June 15, or above the P1-trillion mark, equivalent to 5.46 percent of gross domestic product (GDP).

If the Philippines’ economic measures to fight COVID-19 were divided among the population, the package per capita was $188.26 or over P9,400 for every Filipino.

Oxford Economics estimated the loss of economic output caused by the COVID-19 pandemic in the Philippines at almost 6 percent of GDP, bigger than the value of the government’s response.

South Korea and Vietnam were on top, both with a score of 0.3; China, Hong Kong, Japan and Taiwan scored 0.2; while Singapore and Thailand scored zero.

The recovery scorecard assessed these:

Last week, Oxford Economics projected the Philippines’ GDP to shrink by 5 percent in 2020, a faster pace than the government’s estimate of 2-3.4 percent contraction this year.