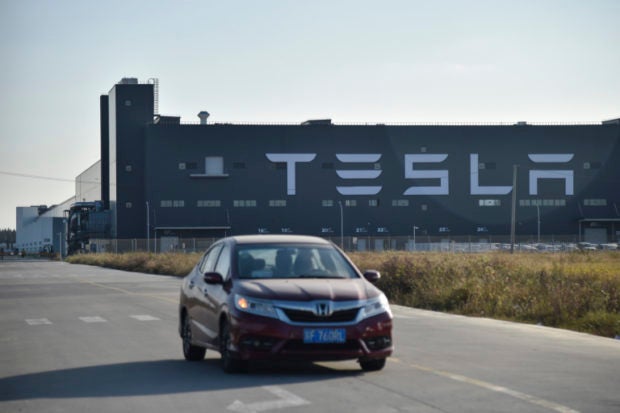 A car drives past the new Tesla factory built in Shanghai on Nov. 8, 2019. Image: AFP/Hector Retamal via AFP Relaxnews

This week, Tesla was crowned the automaker with the biggest market capitalization in the world. At $208 billion, the company is now worth more than Toyota, despite failing to achieve its production targets and very limited profits. A pioneer of all-electric vehicles, Tesla enjoys cult status and has passionate fans. It also benefits from growing sales all over the world, which are increasing year after year.

According to newly announced figures, Tesla sold 90,650 automobiles in the second quarter of 2020. The number is slightly down from the same period in 2019 due to the coronavirus health crisis. This means that in the first half of this year, the American automaker sold a total of 179,146 vehicles, of which the overwhelming majority (more than 80%) were entry-level Model 3 sedans that retail for prices starting at $35,000.

It should also be pointed out that the brand’s initial sales target of 500,000 units sold in 2020 now looks to be unattainable. It remains to be seen if the automaker can exceed its current sales record set in 2019, when it sold 370,000 vehicles.

After the U.S. and Europe, Tesla is planning to conquer China

Not surprisingly, Tesla sells most of its production in the United States, which accounts for nearly three-quarters of the manufacturer’s sales.

In Europe, the brand is continuing to gain ground, in spite of a slow rate of deliveries. In 2019, one out of every three electric cars sold in Europe was a Tesla. Last year, the Model 3 was also the best-selling automobile in any category in Norway, where more than 4 out of every 10 new cars sold are electric. In France, Tesla sold just over 7,400 cars last year, making it the leading foreign seller of all-electric vehicles in the country. French buyers in the market for electric vehicles tend to favor French brands, chief among them Renault, the undisputed leader in the country with its Zoé, and Peugeot, which is enjoying fast-growing sales for its e-208.

Now, Tesla is preparing to attack the Chinese market. The manufacturer recently opened a vast new “gigafactory” near Shanghai, which will supply its future orders from Asia. It has also been reported that the American automaker is considering launching a new cut-price model that will be exclusively destined for the Chinese market. JB

Tesla cars can now handle intersections, thanks to Autopilot update