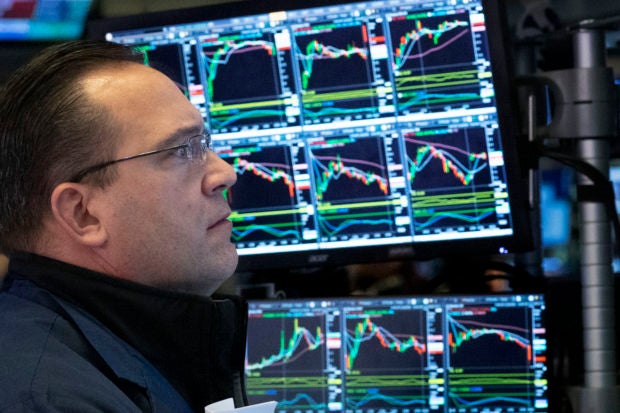 NEW YORK  — Wall Street’s enthusiasm about the reopening economy sent stocks scrambling even higher on Monday, and the Nasdaq composite wiped away the last of its coronavirus-induced losses to set a record.

The broader S&P 500 is now up slightly for the year and back within 4.5% of its own record as optimism strengthens that the worst of the recession may have already passed. Stocks that would benefit most from an economy that’s growing again rose the most, including smaller companies, airlines and oil producers.

The S&P 500 rallied 38.46 points, or 1.2%, to 3,232.39 and is at its highest level since February, which a panel of economists said on Monday is the month when the recession officially began. That’s when employment set a peak before tumbling after businesses shut down across the country to slow the outbreak.

Stocks have been rising since late March, at first on relief after the Federal Reserve and Capitol Hill pledged to support the economy and more recently on hopes that the recovery may happen more quickly than forecast.

Those hopes got a huge boost Friday when the U.S. government said that employers added 2.5 million jobs to their payrolls last month. Economists were expecting to see 8 million more lost.

States across the country are slowly relaxing restrictions on businesses meant to slow the spread of the coronavirus outbreak, which is raising expectations that the economy can pull out of its coma. New York City, which has been the country’s hardest-hit, began allowing retailers and some other businesses to reopen on Monday with some restrictions.

That puts more scrutiny on economic reports this week as investors look for confirmation that Friday’s jobs report was a true inflection point and not just an aberration.

Even if the economy did hit its bottom a month or two ago, economists warn that many risks are still looming over a very long road back to full recovery. Critics are also still saying the stock market may have risen too quickly and may be setting investors up for disappointment, with the biggest risk being another wave of infections that leads to more lockdowns.

“It all starts with the virus itself, and there haven’t been any immediate rise in infections,” said Tom Martin, senior portfolio manager at Globalt Investments. He’s still far from giving the all-clear.

“There’s a lot of risk that businesses and the economy don’t recover as fast,” he said. “When money starts running out in July, are we enough on a path to getting people employed and businesses open?”

Among this week’s economic highlights are reports on inflation and the number of workers applying for jobless benefits. The headliner, though, is likely the Federal Reserve’s meeting on interest rates in the middle of the week.

The Fed has already promised unprecedented amounts of support to keep markets running smoothly, but will the recent upturn in job growth mean it will pull back at all?

Treasury yields have been climbing in recent days, reflecting rising expectations in the market for the economy and inflation. The 10-year Treasury yield dipped to 0.87% from 0.90% late Friday, but it’s up sharply from 0.66% a week earlier.

Too quick a rise in yields could slow spending and the anticipated economic recovery, though. It can also be a heavy weight on the stock market.

Stocks that would benefit most from a growing economy, meanwhile, led the market on Monday to continue their recent trend.
Energy producers, banks and industrial companies were rising more than the rest of the market, and nearly 80% of the stocks in the S&P 500 were higher.

Smaller company stocks also climbed more than the rest of the market, which often happens when expectations for the economy are rising. The Russell 2000 index of small-cap stocks rose 2%.

But several titans were lagging behind the rest of the market, a turnaround from earlier this year when investors piled into the few companies that could hold up in a weak, stay-at-home economy. Facebook rose a modest 0.3%, while Microsoft was up 0.6% and Netflix was virtually flat.

In global markets, Japan’s Nikkei 225 index jumped 1.4% after the government reported the economy contracted at a 2.2% annual rate in the January-March quarter, not as bad as initially estimated.

Indexes in other countries were more subdued, with European markets down modestly.

Oil fell, even after major oil producing nations agreed over the weekend to extend a cut to production through the end of July to counter the blow to demand from the coronavirus pandemic.

Oil had already climbed last week on anticipation of the move, and OPEC officials did not commit to extending the cuts past July or establishing a way to enforce the production limits.