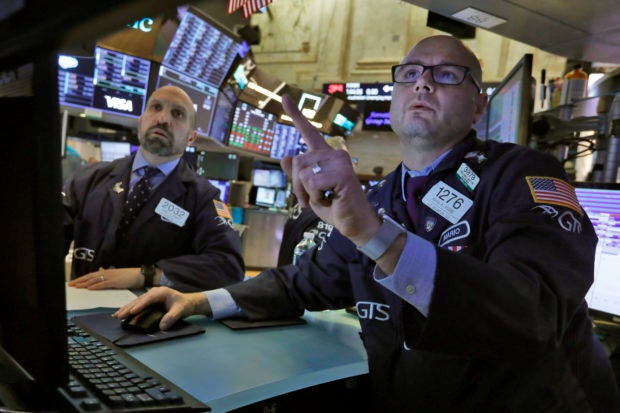 NEW YORK  — Stocks closed broadly higher on Wall Street Thursday as investors welcomed a report showing the U.S. job market continues to climb out of the crater created by the coronavirus pandemic.

FILE – In this Tuesday, March 10, 2020, file photo, specialists James Denaro, left, and Mario Picone work on the floor of the New York Stock Exchange. Global stock markets and Wall Street futures rose Thursday, July 2, 2020, on hopes for the development of a coronavirus vaccine and ahead of the release of monthly U.S. jobs data. (AP Photo/Richard Drew, File)

The S&P 500 rose 0.5%, its fourth-straight gain. The index ended the holiday-shortened week with a gain of 4%. The Nasdaq composite climbed to another all-time high, aided by more gains in technology companies. Energy companies notched some of the biggest gains as oil prices strengthened on hopes that a recovering economy will mean more demand.

The rally wasn’t impervious to worries about the virus outbreak. News that Florida had another sharp increase in confirmed cases helped cut the S&P 500’s early gains by more than half. The bond market also signaled caution, as yields moved broadly lower.

A recent surge in new confirmed cases of the coronavirus in Florida, Texas and several other states has led some governors to halt the reopening of their economies or to order some businesses, such as restaurants and bars, to reclose. That has dimmed some of the optimism for a relatively quick economic turnaround, especially for travel-related sectors like cruise lines.

Even so, investors continue to bet that the recovery will proceed, despite the worrying rise in new cases.

The indexes were up even more at the start of the day’s trading, after the U.S. government said employers added 4.8 million jobs to their payrolls in June for the second-straight month of growth. The unemployment rate remains very high at 11.1%, but last month’s improvement was much better than economists expected.

The pandemic has made collecting data on the economy unusually difficult, which leaves economists uncertain about the numbers’ accuracy.

But they say it’s clear that the job market is improving after collapsing in the spring amid widespread shutdowns. That bolsters investors’ hopes that the economy can recover from its recession relatively quickly as governments relax restrictions.

Such hopes have lifted the S&P 500 to within roughly 8% of the record set in February, after an earlier drop of nearly 34% when recession worries peaked.

The next step, he said, is to see the job gains translate into lasting growth for workers’ incomes and for how much they spend.
The market’s morning gains began to fade after Florida reported more than 10,000 new confirmed cases for the first time.

It underlined how fragile the recovery is, and the bond market was also showing more caution than stocks as Treasury yields ticked lower.

Many workers across the country are still experiencing economic pain, with only about a third of the 22 million jobs lost to the recession recovered so far.

And worries are rising that worsening levels of infections in not just Florida but across swaths of the U.S. South and West could choke off the budding economic improvements. Such concerns have held the market in check since early June following a months-long rocket ride.

Stocks nevertheless moved higher Thursday. Oil companies, raw-material producers and other companies whose profits are very closely tied to the strength of the economy had the market’s biggest gains.

The energy stocks benefited from hopes that a recovering economy will restore some of the demand for oil that vanished in the spring as people stopped driving, airplanes were left parked in the desert and factories went idle. Benchmark U.S. crude oil for August delivery rose 83 cents to settle at $40.65 a barrel. Brent crude oil for September delivery rose $1.11 to $43.14 a barrel.

Bond investors showed less enthusiasm, though. The yield on the 10-year Treasury note dipped to 0.67% from 0.68% late Wednesday. It tends to move with investors’ expectations for the economy and inflation.

U.S. markets will be closed Friday in observance of Independence Day.