Stocks rise on hope that worst of economic plunge has passed 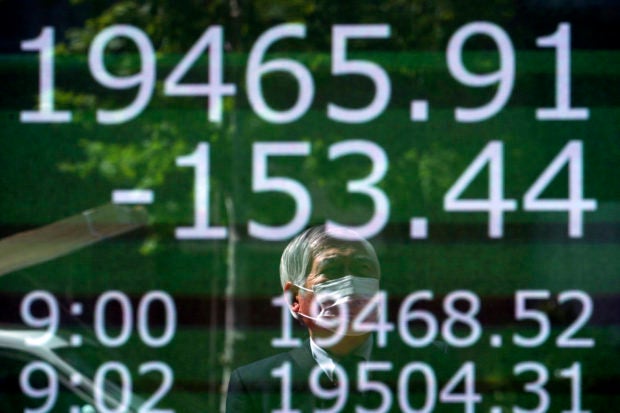 Even with the economy still in miserable shape, some investors are finding reasons to hope the worst of the plunge may have passed, and Wall Street rallied to its biggest gain in a week on Thursday.

A man looks at an electronic stock board showing Japan’s Nikkei 225 index at a securities firm in Tokyo Thursday, May 7, 2020. Asian shares were mixed Thursday after a decline on Wall Street after more depressing data rolled in on the devastation sweeping the global economy. (AP Photo/Eugene Hoshiko)

The S&P 500 climbed 1.2% for its third gain in four days, following up on similar increases in European markets. Other areas of the market were still showing much more pessimism, though, including bonds.

The day’s headliner economic report showed another 3.2 million U.S. workers applied for jobless benefits last week, bringing the total to 33.5 million over the last seven weeks. It’s a shocking number, but it’s also the fifth straight week that it has declined since hitting a peak in late March.

Several companies also cited signs that the worst may have passed in some parts of their businesses, though more weakness is still definitely on the horizon.

That was enough to bolster hopes that have coursed through the stock market recently as investors look ahead to a future that’s not as bad as the horrific present. On Wall Street, investors often care more about how quickly economic pain is increasing than about whether there is more pain.

“Investors are saying: Look, I know things are bad, tell me something I don’t know,” said Sam Stovall, chief investment strategist at CFRA. “If I know things are going to be horrendous, the only way you can surprise me is to the upside.”

Everyone agrees the world is sliding into a severe recession after economies worldwide shut down in hopes of slowing the spread of the coronavirus. But some countries and U.S. states are laying out plans to relax restrictions, which has some investors focusing on the possible resumption of growth later this year.

Investors on Thursday found solace in numbers from other countries further ahead in reopening their economies, which haven’t shown a renewed surge in COVID-19 cases, said Quincy Krosby, chief market strategist at Prudential Financial.

“Right now, what investors and traders are looking at, not to mention public health officials, is how it is working in other countries,” she said. “When you watch other countries opening and doing it successfully without an uptick in cases, it portends well for the U.S.”

Also helping to boost the market, she said, was a federal regulatory approval for the second phase of testing on a potential COVID-19 vaccine from Moderna.

The S&P 500 has more than halved its 33% loss from February into late March, beginning its rally after the Federal Reserve and Capitol Hill pledged massive amounts of aid for the economy. Many analysts have been skeptical of the rally, saying it’s overdone given how much uncertainty still exists about how long the recession will last.

Lyft jumped 21.7% after it said late Wednesday that ride levels appear to have steadied after hitting a bottom in the second week of April. Over each of the three following weeks, the number of rides has grown from the prior week, though they’re still down more than 70% from a year earlier.

Stocks whose fortunes are most closely tied to the strength of the economy helped lead the market. Energy producers in the S&P 500 rose 2.5% for the biggest gain among the 11 sectors that make up the index. Financial stocks were close behind.
They have been among the market’s hardest-hit stocks this year on worries that the recession is erasing demand for oil and could lead to a wave of loan defaults for banks.

The bond market offered a much more cautious take. The yield on the 10-year Treasury fell to 0.63% from 0.71% late Wednesday. Yields tend to fall as investors downgrade their expectations for economic growth and inflation.

The 10-year yield had climbed strongly a day before after the U.S. government gave an update on how it’s borrowing to help pay for the trillions of dollars it’s pumping into the economy to combat the pandemic.

The yield on the two-year Treasury, meanwhile, fell to a record low on Thursday, according to Tradeweb.

Encouraging data showed a 3.5% rise in exports for China in April, driven by electronics shipments and textiles, which included a surge in mask exports. Forecasters warned the strength is unlikely to last, though, as the coronavirus pandemic depresses global consumer demand.