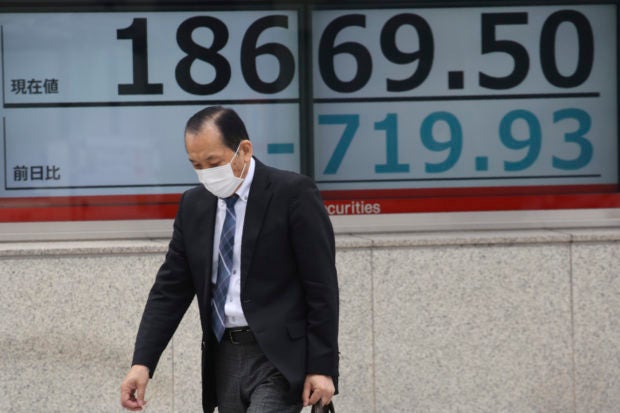 A man walks by an electronic stock board of a securities firm in Tokyo, Monday, March 30, 2020. Asian shares started the week with further losses as countries reported surging numbers of infections from the coronavirus that has prompted shutdowns of travel and business in many parts of the world.(AP Photo/Koji Sasahara)

BANGKOK — World markets started the week with more losses as countries reported surging numbers of infections from the coronavirus, forcing prolonged shutdowns of travel and business in many regions.

Shares fell in London, Paris, and Tokyo on Monday but surged 7% in Australia after the government promised more recession-fighting stimulus. The United States contract for oil fell below $20 a barrel for the first time since 2002.

U.S. futures fluctuated overnight, with the future for the S&P 500 up 0.1% shortly before the start of trading on Wall Street, while that for the Dow industrials dropped 0.1%.

Hopes that a $2 trillion U.S. relief bill would ease the economic havoc brought by the pandemic did little to alleviate the gloom prevailing in many markets.

The pandemic relief bill approved by the Congress and signed Friday by President Donald Trump includes direct payments to households, aid to hard-hit industries like airlines and support for small businesses. Analysts expect markets to remain turbulent, however, until the outbreak begins to wane.

“Sentiment once again took a turn for the worse going into a week of reckoning by means of economic fundamentals,” analyst Jingyi Pan of IG said in a commentary. “The rally seen for Wall Street last week may amount to little more but a relief rally with sentiment turning sour once again going into a fresh week.”

The push to deliver financial relief has gained urgency worldwide as the outbreak widens. The number of cases in the U.S. has now surpassed those in China and Italy, climbing to more than 142,000 known cases, according to Johns Hopkins University. The worldwide total has topped 723,000, and the death toll has topped 34,000, while nearly 152,000 have recovered.

Australian shares jumped higher after the government offered a $130 billion package of financial support that includes wage subsidies of up to $1,500 per two weeks to businesses to keep workers on the job.

Some investors have emerged to hunt for bargains as prices kept falling, said Francis Lun, CEO of Geo Securities in Hong Kong.

He viewed it as a bit too early.

“I think whatever rally you see, is really a false rally, it will be only a flash in the pan. It’s only temporary. Don’t go bottom fishing just yet because the worst is still to come,” Lun said.

For most people, the new coronavirus causes mild or moderate symptoms, such as fever and cough that clear up in two to three weeks. For some, especially older adults and people with existing health problems, it can cause more severe illness, including pneumonia, or death.

The damage from the pandemic to corporate profits, the ultimate driver of stock prices, has remained uncertain.

But energy companies were suffering as the price of oil sinks. U.S. benchmark crude dropped $1.19 to $20.32 per barrel in electronic trading on the New York Mercantile Exchange. It earlier traded briefly below $20 a barrel, the lowest since early 2002. Investment bank Goldman Sachs has forecast that it will trade consistently below $20 a barrel in the next two months because storage will be filled to the brim and wells will have to be shut-in.

The yield on the 10-year Treasury slipped to 0.65% from 0.68% late Friday. Lower yields reflect dimmer expectations for economic growth and greater demand for low-risk assets.