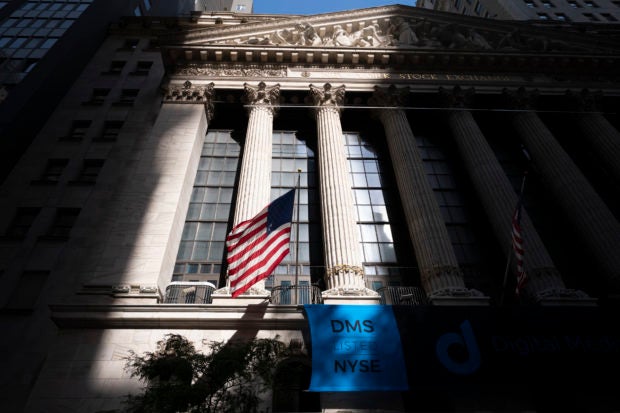 NEW YORK  — Wall Street stumbled on Thursday after a report showed layoffs continue to sweep the country at a stubbornly steady pace, one of several mixed reports to highlight the uncertain path ahead for the economy.

The S&P 500 slipped 0.3%, following up on declines across Europe and Asia, as a worldwide rally faded. Stocks in China fell particularly sharply after a report showed shoppers there are slow to spend even though its economy returned to growth.

Heavy losses for travel-related stocks helped pull the S&P 500 to its first loss in three days, down 10.99 to 3,215.57. Cruise-ship operators, airlines and hotels gave up chunks of their big gains from a day earlier.

“It’s just a pause,” said Adam Taback, chief investment officer for Wells Fargo Private Bank. “I wouldn’t read too much into it. The Nasdaq continues to be under a little bit of pressure, but it’s due for a breather as well.”

It marks the latest ebb for markets, which have mostly been churning up and down for a little more than a month.

Pushing stocks higher have been signs of strengthening in the economy as lockdowns have eased, along with massive aid from the Federal Reserve and Congress. Hopes for a potential COVID-19 vaccine also helped the S&P 500 erase most of an earlier 34% drop from its record, down to 5%.

But pulling markets lower has been the relentless rise of coronavirus counts across much of the United States, which threatens to undo all the improvements. California has already brought back orders for bars and other businesses to close due to a surge in cases, and the worry is other states will have to follow suit.

Reports on Thursday showed that layoffs across the country remain stubbornly high, with 1.3 million workers filing for unemployment benefits last week. That’s down slightly from the prior week, but only by 10,000. The improvement was also weaker than economists expected.

Worries are already high about joblessness, as $600 in weekly unemployment benefits provided by the federal government is set to expire this month.

The yield on the 10-year Treasury fell to 0.61% from 0.63% late Wednesday. It tends to move with investors’ expectations for the economy and inflation.

Tech stocks were among the market’s hardest hit, a turnaround from their remarkably resilient run through much of the pandemic.

Microsoft fell 2%, and Apple lost 1.2%. It’s a rare step back for the giants, which are both still up roughly 30% for 2020 on expectations that they can keep growing almost regardless of the pandemic.

On the winning side were several financial stocks, whose profit reports this week have helped kick off earnings season for the market.

Morgan Stanley rose 2.5% after it reported much stronger profit for the latest quarter than analysts expected. The Hartford Financial Services Group jumped 4.7% for the largest gain in the S&P 500 after it said it expects to report second-quarter results above what Wall Street had been forecasting.

Bank of America also turned in a better profit report than expected, but it fell 2.7% after it set aside $4 billion to cover loans potentially going bad amid the recession. That helped keep financial stocks overall in the S&P 500 down 0.1%, after losing an earlier gain.

In Asia, stocks in Shanghai slumped 4.5% for their worst day since February. It’s the third straight drop for them as some froth blows out of the market following a 15% surge in less than two weeks.