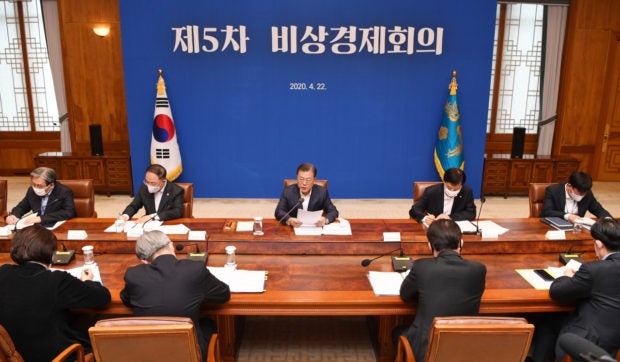 (Yonhap) via The Korea Herald

The funds are meant to help them weather the crisis, which Moon characterized as the worst since the 1997 financial meltdown, and to help maintain employment.

The president then instructed his economic team to prepare swiftly for the launch of a task force on the Korean-version New Deal revolving around major national infrastructure projects.

“Now is the beginning stage of a crisis,” he said, presiding over the fifth and last weekly emergency economic council session on the economic and financial fallout of COVID-19.

He pointed out that core industries are at risk and companies are starting to find it difficult to ride out the predicament with the government’s provisional liquidity supply.

The government will increase the size of the emergency finance relief scheme to 135 trillion from the 100 trillion won decided in previous emergency economic council sessions, according to Moon.

He also said the government will play a leading role in creating jobs, adding that half a million will be offered, with many for youths.

“Employment shock may come more extensively and for a longer time, which we have not experienced,” Moon warned.

The government will make sure to shield those key industries at any cost with “strong determination,” he said.

It plans to give 500,000 won each to 930,000 freelancers and other workers who are not covered by the state employment insurance, for three months.