Soldier trades in gun for a plow 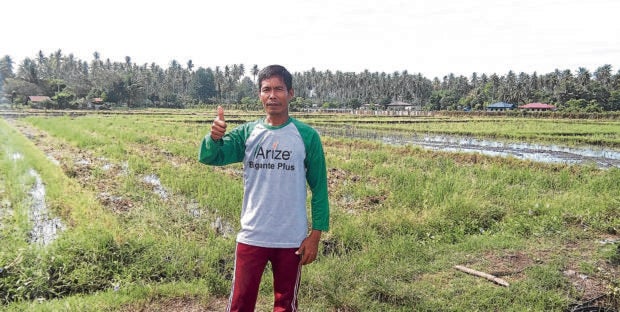 After serving the country in the military for 21 years, Edgar Romupal has deci­ded to exchange his gun for a plow to till his own farm in General Santos City as part of his retirement plan.

He was exposed to farming early, having been raised by parents whose main livelihood in Tarlac revolved around food. Romupal’s parents used to grow rice and vegetables in their little piece of land, and he remembers either wai­ting for rainfall or praying for clear skies, as local agriculture was dependent on the weather.

The uncertainties and risks that come with agriculture may dishearten most people, but not this 50-year-old, who believes agricultural practices have changed since his parents engaged in farm work, and for the better.

In General Santos City, where he now lives with his family of five, he renewed his interest in farming after being introduced to free irrigation and hybrid seeds—technologies that evaded his parents but he is now taking advantage of.

These opportunities encouraged the former soldier to concentrate on farming. Four years since he planted his first palay, he has now become the region’s poster boy for planting rice the right way.

DA and Bayer aim to encourage more farmers to switch to using hybrid seeds and transform 10,000 hectares into high-yielding farms.

Through a partnership, both institutions deploy field technicians to give enough time and attention to the farmers participating in the program, with Bayer implementing a season-long training program through its Bayer Agricademy.

The training program includes lessons on pest and di­sease management and recommended irrigation practices, and is available in North Cotabato, South Cotabato, Saranggani and Sultan Kudarat.

Using the small capital he saved from his military services, Romupal took on a 1.7-hectare rice land and learned new ways of farming.

He was given free hybrid seeds by their city agriculturist and Bayer Philippines, and he was taught how to take care of his land. Unlike inbred crops, Romupal said hybrids could be more delicate, but the gains easily make up for the extra labor.

“You have to weed more often, and you have to make sure that the land is healthy. But other than that, it is almost the same as using inbred seeds. You just have to be patient and hardworking,” he said.

Indeed, his yield reflected the work he put in. When before, his 1-ha farm could only produce an average of 6,000 kilos per cropping, he was able to increase this to 12,852 kilos from using Bigante Plus, a type of hybrid seed.

Romupal’s story, however, did not happen over one cropping season. He shared that his first foray into using hybrid was not successful, but he decided to give it another shot with the new learnings he gathered from his failure.

Aside from rice, he grows corn and selected vegetables, too—a form of diversified cropping that other farmers in the area have started to replicate.

“It’s better to work hard and to work smart. Who knew that my land could yield so much? I didn’t imagine it,” he said.

Due to his story of success, Romupal received a 32-inch LED television and a battery-opera­ted sprinkler from Bayer. He has also served as an inspiration to other farmers who remain skeptical of modern technologies.