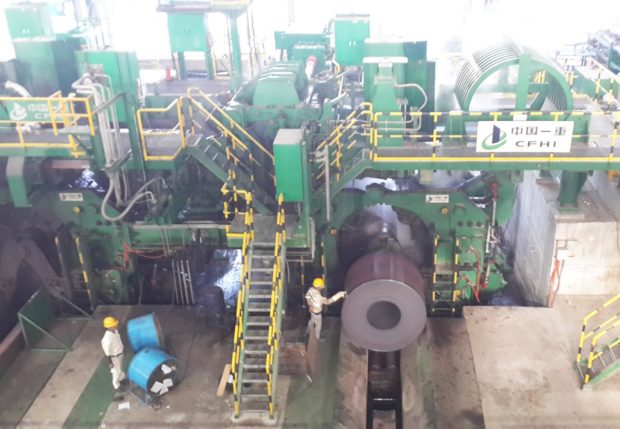 A worker marks a stainless steel hot rolled coil (HRC) that just came out of the machine in Morowali Industrial Park’s HRC plant in Morowali, Central Sulawesi, on Sept. 18. The industrial complex smelts nickel and processes it into stainless steel. (JP/Stefani Ribka)

JAKARTA — President Joko “Jokowi” Widodo announced on Tuesday that seven foreign companies had confirmed plans to relocate production facilities to Indonesia, mostly from China, an encouraging signal for the country’s investment climate amid the pandemic.

The relocation of factories of the seven companies, which include South Korean industrial conglomerate LG and Japanese electronics giant Panasonic, is estimated to bring investment of US$850 million to the country and potential employment for 30,000 workers, according to the Investment Coordinating Board (BKPM).

The President also highlighted the issue of land procurement in the country and committed himself to backing up the investors until such problems were resolved. For investors who had not yet procured land for their facilities, he offered the newly established Batang Industrial Park as a location.

“We will provide around 4,000 hectares of land here, and in the first phase, there will be 450 hectares,” he said.

The coronavirus outbreak, which was first detected in China, has strained Indonesia’s foreign direct investment, as projects have been delayed as a result of social restrictions to contain the spread of the virus. Indonesia has booked a 9.2 percent year-on-year (yoy) decline in foreign direct investment (FDI) to Rp 98 trillion ($6.8 billion) in the first quarter of 2020.

The pandemic has also disrupted global supply chains and has made some companies question their heavy reliance on China, while the country’s trade war with the US burdened the industries with additional tariffs.

To take advantage of the situation, the government has established a special task force to attract businesses leaving China and facilitate their relocation to Indonesia.

Jokowi stated that 17 more companies were looking to open facilities in Indonesia. BKPM data show that the potential relocation and facilities expansion of the 17 companies will bring in total investment of $37 billion and provide employment for 112,000 people.

He said the country had failed to lure companies in the past, such as when 33 companies moved away from China last year but none went to Indonesia.

According to government data, the Panasonic relocated its facilities to Indonesia to turn Southeast Asia’s biggest economy into its export base for home appliances. Meanwhile, LG Electronics moved its facilities from South Korea as it planned to turn Indonesia into its regional hub to expand its market in Asia and Australia.

Alpan reportedly plans to relocate their facilities from Xiamen, China, to Kendal, Central Java, due to the 25 percent import tariff slapped on products from China.

State-Owned Enterprise Minister Erick Thohir said he would ensure a smooth licensing and relocation process for investors to set up factories in the industrial park.

“The Batang Industrial Park has a prime location and is owned by [state plantation firm] Perkebunan Negara IX, so there will be no problem in the relocation process and licensing in the future,” he said.