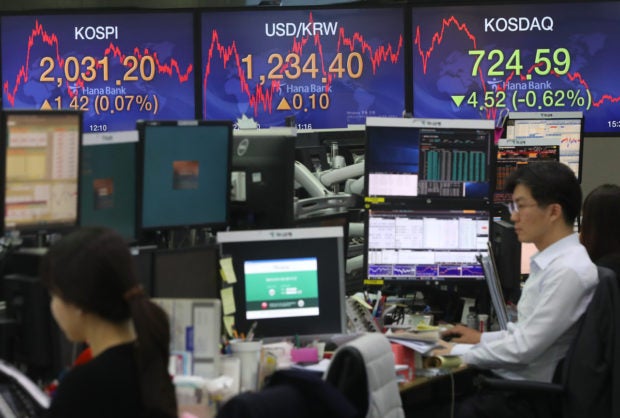 (Yonhap) via The Korea Herald

SEOUL — South Korean stocks finished a tad higher Wednesday despite escalating tension between the United States and China, as investors sought to scoop up bargains amid growing hopes of an economic recovery. The Korean won fell against the US dollar.

The benchmark Korea Composite Stock Price Index (KOSPI) added 1.42 points, or 0.07 percent, to close at 2,031.20, extending its winning streak to a third consecutive session. Trading volume was high at about 1.16 billion shares worth some 12.5 trillion won ($10.1 billion), with winners outnumbering losers 477 to 362.

The advance came one day after the KOSPI breached the psychologically significant 2,000-point threshold for the first time since March 6.

The index fluctuated throughout the day after opening slightly lower on news reports that the US may freeze assets of Chinese officials and businesses in retaliation against Beijing’s push for a new national security law for Hong Kong.

“The US has in fact declared plans to take sanctions should China vote on the national security law for Hong Kong. The US-China dispute may further escalate toward the end of this week,” said NH Investment & Securities analyst Noh Dong-kil.

“The reason the impact on the stock market may have been limited, despite the escalating tension between the two, is because they both reaffirmed their commitment to fulfilling their first stage trade agreement,” Noh added.

South Korea’s exports had dropped for 14 consecutive months since December 2018 amid the prolonged trade dispute between the world’s two largest economies that was put on pause after they signed the trade agreement in January.

The US and China are South Korea’s two largest trade partners.

“The market seems to be taking a breather, considering that the hopes of economic reopening and China’s stimulus measures have already been projected in the KOSPI in the previous session,” Kiwoom Securities analyst Seo Sang-young said.