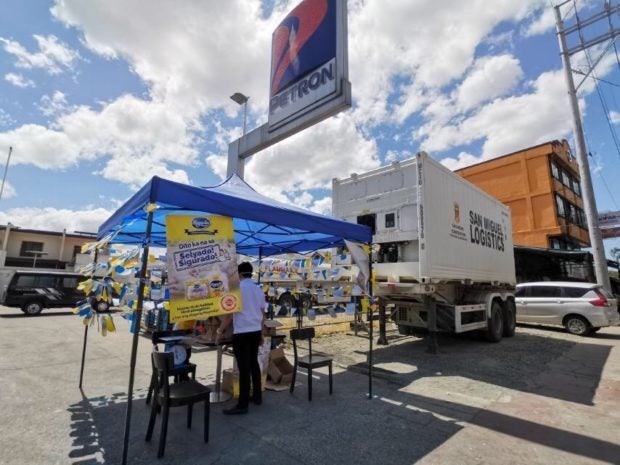 Conglomerate San Miguel Corp. has deployed rolling food stores to strategic parts of the metropolis, seeking to bring fresh chicken and refrigerated meat straight to consumers during the lockdown of Luzon.

SMC president and chief operating officer Ramon S. Ang said on Thursday that the presence of food trucks in strategic and accessible locations around the country as part of the expanded “Manukang Bayan on Wheels” program would make it easier for consumers to avoid queues in wet markets, groceries and supermarkets.

“We thought of expanding our Manukang Bayan on Wheels to somehow lessen the time people spend lining up at stores to buy chicken,”Ang said. “We understand that these are not normal times and people put themselves at risk when they go out to get necessary supplies, so wherever possible, we are bringing the supplies directly to them.”

“Also, doing this will allay fears of food supply shortage. As I’ve said before, there is no reason to panic as we have enough food supplies to last way beyond the quarantine,” he added.

“We are looking to expand the coverage of these rolling stores in more locations in the coming days as long as there is a need. We will also make available more food products as we expand distribution channels to online retailers, for those who cannot go out of their homes to purchase food,” Ang said.

For most of last week, the company had mobilized 1,129 trucks to bring food directly to consumers in various barangays nationwide. It has served a total of 144 metric tons of meat products to date. This is on top of ongoing efforts to offer food to consumers straight from its facilities all over the country.