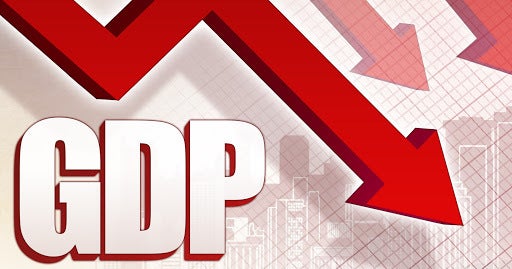 It marked the sharpest quarterly contraction since the fourth quarter of 2008, when the nation’s economy sank 3.3 percent on-quarter.

The first-quarter gross domestic product, however, was above market expectations. A survey conducted by Yonhap Infomax, the financial news arm of Yonhap News Agency, had expected the nation’s economy to contract 1.81 percent in the quarter.

On an annual basis, South Korea’s economy added 1.3 percent in the first quarter, marking the weakest growth since the third quarter of 2009, when the economy increased 0.9 percent.

Shortly after the BOK announced the first-quarter GDP data, Finance Minister Hong Nam-ki said the pandemic’s shocks to South Korea’s exports and job markets could widen in the second quarter.

South Korea has apparently managed to bring the coronavirus outbreak under control without lockdown measures.

Park Yang-su, a director-general at the BOK, told a news conference held over YouTube that consumer sentiment recently showed signs of a recovery as the nation eased some restrictions on social-distancing guidelines, but exports and employment suffered.

Park stopped short of forecasting whether the Korean economy will contract this year but said exports may take a bigger hit in the second quarter.

“We believe the current shock is only temporary and that GDP growth will rebound strongly to 5 percent in 2021, supported by the release of pent-up consumption built during the pandemic and the government’s stimulus measures. Investment should also recover as global trade conditions normalize,” the agency said in a statement.

Earlier this month, the BOK kept its policy rate frozen at an all-time low of 0.75 percent, citing the need to see the effect of steps already taken but painted a grim growth outlook, forecasting “considerably” slower growth than earlier expected.

South Korea has pledged to increase the size of its aid package by 90 trillion won ($73 billion) to 240 trillion won for coronavirus-hit companies and job protection.

The nation lost about 195,000 jobs last month, marking the sharpest monthly decline since May 2009, when some 240,000 jobs disappeared, according to the data compiled by Statistics Korea.

The International Monetary Fund (IMF) has predicted that South Korea’s economy will shrink 1.2 percent this year as the global economy is expected to hit its worst year since the Great Depression of the 1930s over the pandemic.

The world economy is expected to contract 3 percent this year, the IMF said. (Yonhap)