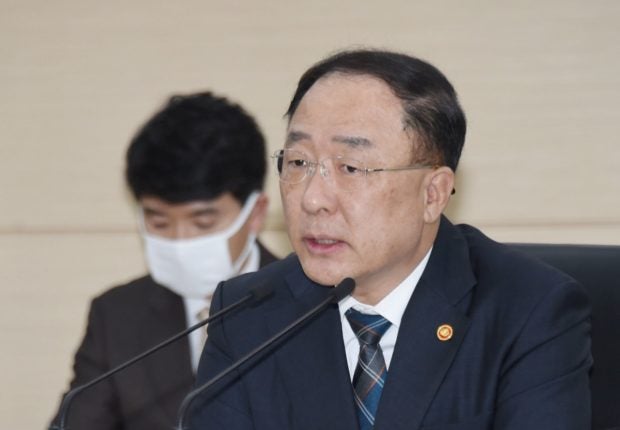 Finance Minister Hong Nam-ki speaks at a meeting with officials in central Seoul on Monday. Yonhap via The Korea Herald

SEOUL — South Korea’s government on Monday vowed to announce key economic measures including extensive job creation actions within the upcoming weeks, upon judgment that the economic risks stemming from the novel coronavirus pandemic will persist.

“This month will be the time to outline (the directions) for the second-half of the year against the economic crisis,” Deputy Prime Minister and Finance Minister Hong Nam-ki said at a meeting of officials.

The chief fiscal policymaker thereby underlined that the half-year economic policy, the government’s third supplementary budget bill and the Korean version of the “New Deal” should be announced by early June as planned.

The Korean-style proposal — recalling a series of programs, public work projects and financial reforms in the US for recovery from the Great Depression in the 1930s — will consist of large-scale digital information technology projects, online educational services and online medical services, according to the ministry.

Hong also called for special measures to accelerate the domestic market and consumption, while highlighting the need for ideas that could temporarily lift hurdles for corporate investment.

While Asia’s fourth-largest economy has seen visible improvements in its epidemic graphs over recent weeks, taking a step closer to alleviating its quarantine rules, fiscal officials warned that the real impacts “have only just begun,” stressing the need for mid- and long-term protective actions.

“Most experts are projecting the second quarter (to be a low point for the economy), so the signs of real shocks including contraction of the real economy or unemployment are (just starting to surface),” Vice Finance Minister Kim Yong-beom said at a macroeconomic meeting with ministry officials held earlier in the day.

“The government will make its best efforts to protect jobs since it is key to overcoming a national crisis, and create new jobs in line with our plans to launch the Korean version of a ‘New Deal Project,’” he added.

The latest oil price volatility, risks surrounding emerging markets and the possibility of reigniting the US-China trade war due to global reshoring were cited as major factors that could bring about a “real shock” and prolonged economic instability.

Oil producers have been struggling to cope with the volatility after the historic oil price crash last month, when US West Texas Intermediate futures plunged below zero for the first time in history.

“With the current account and fiscal balances of such nations to worsen alongside their economic uncertainties, and possibility of them retrieving the oil money, it could throw the global economy off balance.”

The US-China trade war could be reignited with both nations attacking each other over handling of the coronavirus and immediate recovery of the economy is unlikely at the moment, Kim said.

Meanwhile, Korea’s consumer price index rose 0.1 percent on-year to 104.95 in April, data from Statistics Korea and the Bank of Korea showed, marking the lowest on-year growth in six months. The central bank cited the impact of the oil price crash and slowdown of demand due to the COVID-19 pandemic.

To provide a cushion for the economy, Korea on Monday rolled out emergency disaster relief funds totaling 14.3 trillion won ($11.65 billion) to all households to cope with the economic impact of the coronavirus outbreak. The National Assembly last week approved a supplementary budget of 12.2 trillion won to fund the program.

Korea’s economy shrank 1.4 percent on-quarter in the January-March period, marking the sharpest quarterly contraction since the last quarter of 2008.