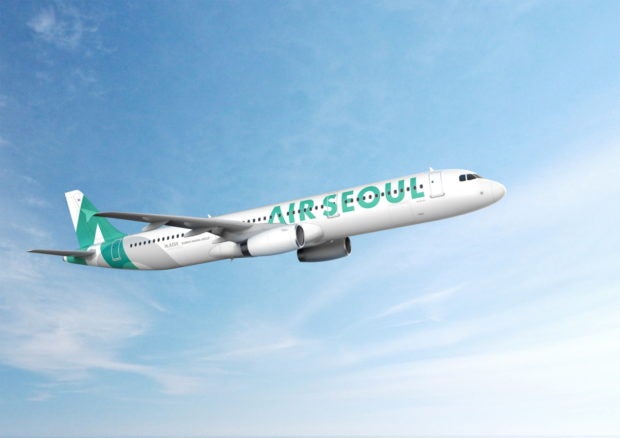 SEOUL — As the impact of the coronavirus pandemic lingers on, some low-cost airlines in South Korea are ramping up domestic flights and cautiously launching new air routes within the country to soften the blow.

Low-cost carrier Air Seoul said Monday it would fly four flights between Gimpo and Busan per day starting Aug. 21, as it touted an “extra 3-inch seat pitch” compared to its rivals.

“As figures show, the number of passengers at Gimpo Airport is rising and given the trend, we’ve increased the flights to Jeju and decided to launch the new Busan route,” one official at Seoul Air said.

The official added that the new route to the southeastern city also comes on the back of corporate demand for the city as a popular business trip destination.

The airline has also been increasing the number of flights for the route between Gimpo and Jeju since April, with eight flights currently flying to and from the island per day.

Jin Air, another low-cost airline which is owned by Korean Air, is launching three new domestic air routes between Ulsan and Jeju, Gimpo and Ulsan and Gimpo and Daegu. The low cost carrier said Monday that it would use a Boeing 737-800 for the routes, which will begin Friday.

While the number of passengers traveling through Incheon Airport has dropped by over 95 percent in recent months as international travel restrictions took effect, other airports in the country that rely on domestic flights paint a different picture.

Between July 1 and 26, over 4.18 million people flew domestic flights at 14 airports across the country, according to Korea Airports Corporation, which amounts to 91.5 percent of the travel volume during the same time last year.

And it’s against this backdrop that airlines are looking inward.

“With no international routes during the holiday season, people are traveling within the country and airlines are also flying domestic flights including new routes as international flights are not taking off,” one official at Korea Airports Corporation said.

Air Busan, a subsidiary of Asiana Airlines and a sister airline to Air Seoul, is going the extra mile by offering two free itinerary changes for the discounted international flights leaving from Busan to Japan, Taiwan and Vietnam between October and March next year.

The bold move comes as signs of a second wave creep up across the world. Japan reported 835 new cases of coronavirus on Sunday, according to NHK.

On Monday, the Vietnamese government decided to evacuate 80,000 people from the popular resort city Danang after three residents tested positive — the first local case since April.