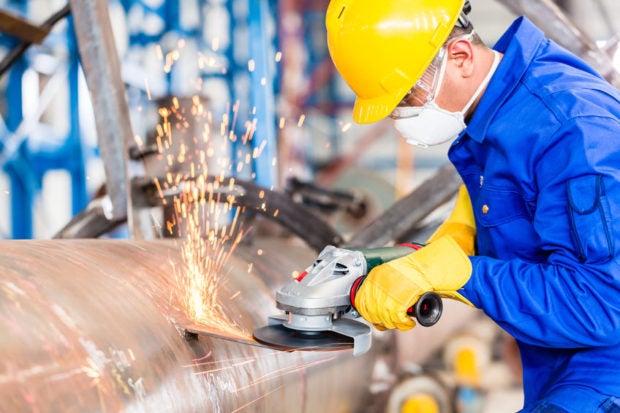 MANILA, Philippines – Manufacturing in the Philippines shrank to its lowest level in April, at the height of the enhanced community quarantine (ECQ) imposed in Luzon and other parts of the country to contain the spread of the coronavirus disease 2019 (COVID-19).

Since the PMI remained below the 50 “no-change” or neutral mark, it meant that manufacturing contracted.

The index fell beneath 50 since March, as the ECQ started during the middle of that month.

IHS Markit collected data from April 7-23, in the midst of the lockdown that halted manufacturing of non-essential goods due to physical distancing restrictions.

“Production fell rapidly, while new orders and export sales declined at record paces. Job shedding continued, although the rate of decrease softened from March,” IHS Markit said in its report.

“Lockdown measures were extended throughout April, leaving most firms unable to operate at normal capacity. Production levels thus collapsed, with the rate of contraction by far the quickest since the series began in January 2016,” IHS Markit said.

“The lockdown also had a large impact on manufacturing demand at the start of the second quarter, as restricted activity led clients to cancel orders and consumers to limit spending. In addition, exports fell drastically due to company closures and global measures to limit the spread of COVID-19. As a result, total new orders fell at the fastest pace seen in the series history,” IHS Markit added.

IHS Markit also noted that “pre-production inventories fell substantially, while stocks of finished goods also decreased at a sharp rate” amid the ECQ.

IHS Markit said that the number of layoffs eased in April compared to March when the ECQ began, but last month’s job shedding remained “steep.”

“The softer fall in employment was in line with a slightly improved outlook for future output at Filipino manufacturers. Respondents were more upbeat of a lifting of lockdown measures in the near term, while also noting plans for new products and the completion of outstanding orders once activity resumed,” IHS Markit explained.

Some areas with fewer COVID-19 cases had been placed under a less restrictive general community quarantine (GCQ) where most economic activities, including manufacturing of certain goods, can resume.

However, the regions of Metro Manila, Calabarzon and Central Luzon—where most manufacturing facilities are located—remain under ECQ until mid-May.

As for raw material costs, IHS Markit said that these declined for the second straight month last April.

“According to panellists, reduced input demand led suppliers to lower prices, while a sharp drop in oil prices was also recorded. However, raw material shortages weighed on cost burdens, with the overall fall in input costs weaker than in the previous month.”

“The Philippines’ manufacturing PMI joined a chorus of data demonstrating the widespread and severe impact of lockdown measures on the global economy in April… Output declined at a rapid pace, signalling that industrial production data is likely to be bleak during the lockdown period,” IHS Markit economist David Owen said.

”A removal of lockdown measures in the Philippines may temper these issues, but they will likely remain in some form for the duration of this global crisis,” Owen added.