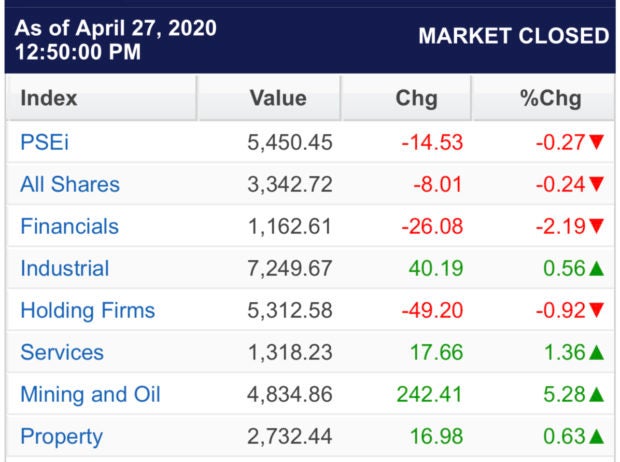 The local stock barometer missed the upswing across regional markets on Monday as investors gauged the economic cost of an extended lockdown of Metro Manila.

A veteran stock broker cited the adverse impact of the prolonged lockdown on the domestic economy, particularly on employment, especially as more and more overseas Filipinos – including those working in cruise liners – were now going home due to job cuts.

At the local market, the index was weighed down most by the financial counter, which fell by 2.19 percent, as banks brace for surging credit losses amid the challenging business environment caused by the COVID-19 pandemic.

The market’s losses was tempered by the gains eked out by the industrial, services, mining/oil and property counters. The mining/oil sector gained 5.28 percent, while the services counter added 1.36 percent.

Value turnover for the day was thin at P4.07 billion. There was P823.64 million worth of net foreign selling.

There were 112 decliners that edged out 88 advancers, while 32 stocks were unchanged.

The country’s largest conglomerate, SM Investments, weighed down the market with its 4.18-percent drop, while its banking arm BDO also lost 3 percent.

On the other hand, ICTSI advanced by 5.13 percent, while URC, Ayala Corp. and JG Summit all rose by over 2 percent.

Puregold and Ayala Land both gained over 1 percent.