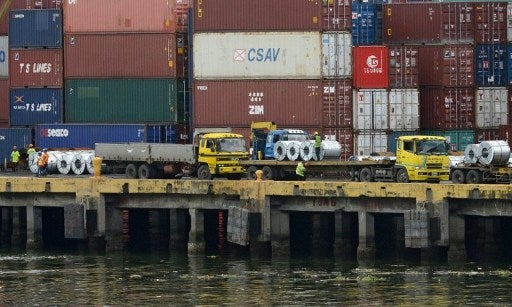 The arrival of goods in Manila’s crucial ports has ramped up in recent days—an early sign of recovery ahead of the target lifting of the lockdown on April 30 this year.

Philippine Ports Authority (PPA) general manager Jay Santiago told the Inquirer on Thursday the daily arrival of cargo containers at the Manila International Container Terminal and the Manila South Harbor is now at 85 percent of the volume before the enhanced community quarantine (ECQ) was implemented on March 17.

“It’s still below average from pre-ECQ but nearing it,” Santiago said.

Volume in the early days of the quarantine, which was imposed to restrict the movement of people and halt the spread of the new coronavirus disease (COVID-19), fell to a low of 40 boxes per day versus 4,000 boxes before the lockdown, Santiago explained.

He said much of the new arrivals were order backlogs prior to the implementation of the ECQ. He said Manila’s ports were also receiving more regular shipments from China, which shuttered large portions of its economy in January to control the outbreak.

The pullout of goods from the port area, however, has lagged behind, Santiago said.

As a result, port capacity—or the port’s capability to clear cargoes within a certain period—hit 85 percent on Wednesday versus 73 percent the day before. According to the PPA, the optimal level of utilization is around 60-70 percent at any given time.

“It’s only here where the pullouts are not regular,” Santiago noted.

Overstaying cargo contai­ners were piling up in Manila’s ports two weeks ago, threate­ning a shutdown as utilization neared 100 percent.

In response, the PPA, the Department of Finance, Department of Agriculture, Department Trade and Industry, and the Bureau of Customs (BOC) issued an April 2 joint administrative order (JAO 20-01) outlining faster processing and penalties for overstaying containers.

Under the rules, cargo containers staying in the port more than 30 days after discharge should be withdrawn within five days from the issuance of the guidelines or be considered abandoned, paving the way for the government to confiscate the goods.

Under the rules, the BOC also cut processing times for cargo containers. From April 1-7, the BOC assessed 21,795 containers, an increase of over 200 percent from the previous week, Malacañang said in its April 13 report to lawmakers on the use of special powers under the Bayanihan To Heal As One Act.

The PPA earlier said income in March plummeted 79 percent year-on-year due to P300.9 million as Luzon went on isolation.