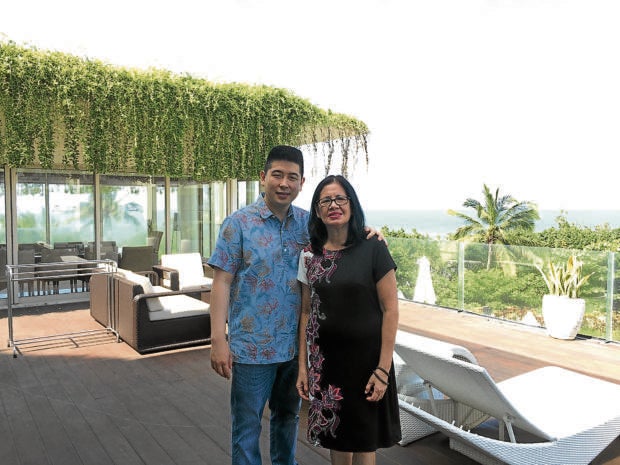 Sia learned his first business lessons from his mother, Paz.

Every day after school when he was a young boy in Capiz, Edgar “Injap” Sia II and his siblings would head straight to their parents’ small grocery store to help out. This was to comply with the wishes of their mother, Paz, who wanted the kids to learn the ropes early.

“I learned a lot from my mo­ther. On the personal side, she gave her children real unconditional love that is not said but felt. Since I was a kid until now, I can really feel her genuine and deep love for me and my siblings. Nothing is more paramount to her than the family,” Sia tells the Inquirer.

His mother drilled into him and his siblings the importance of integrity and hard work by exemplifying the values, he notes. “She also instilled in us, her children, the importance of family, which I am grateful for because it made the bond in our family very strong. For many years she made sure that the family is always together.”

Daily grocery duty lasted for a few hours, from after school to the 7 p.m. closing time. Weekends and summers were likewise mostly spent in that same 100-square-meter store called Injap Enterprises, set up by Sia’s parents on Plaridel Street. Repacking noodles, sugar, salt and candles as well as rolling plastic covers and wrappers and cashie­ring were part of the routine.

In the 1950s, Sia’s grandfather ran a store called People’s Commercial in Capiz. In the 1980s, Sia’s parents set up their own. As the business thrived, they moved to a bigger place in the 1990s, and renamed the store “Injap Supermarket.” To date, Sia’s parents still operate two stores with a combined footprint of 3,000 square meters. His mama Paz is now 65.

“When we were growing up, the grocery of our grandparents and parents became our living room,” Sia says.

Although he was born in Ilo­ilo, it was in Roxas City, Capiz, where Sia grew up and attended primary school at Capiz Commercial School. No, he never saw any “aswang,” or evil spirit in folklore, in Capiz, which he remembers as a very laid-back province with hundreds of tricycles plying the streets.

Sia would later move to Iloilo to attend high school at Hua Siong and college at the University of San Agustin, eventually dropping out to pursue entrepreneurship that would eventually earn him his first billions.

But long before he built (and then sold to Jollibee) restaurant chain Mang Inasal and set up DoubleDragon Properties, the first company that he brought to public hands in 2014, Sia was first and foremost a grocery shop-keeper.

By the time he was a teena­ger, Sia keenly observed the ope­rations of the grocery business and always tried to analyze how to improve sales and customer experience, increase efficiency and tighten controls. When their store still employed the traditional cash registers, for instance, Sia persuaded his parents to shift to the new point-of-sale (POS) barcode system to improve the efficiency and controls.

During the summer when he was 15 years old, Sia enrolled himself in a baking and bread-making class. He convinced his parents to start in-house production of loaf breads, cakes and “pandesal” to sell in their grocery store. He pored over newspaper classified ads to scout for second-hand bakery equipment—dough mixers, oven, dough roller and baking pans —found a defunct bakeshop in BF Homes Parañaque unloa­ding its wares, and persuaded his folks to buy these. He and his father flew to Manila to seal the purchase. As soon as they got back to the province, he hired four baking staff, and after one month, the bakery operation was up and running.

“Looking back, I think convincing my parents became easier since I took the initiative to first study and thoroughly learn the trade. That was my first experience in putting together the nuts and bolts of a new business at 15 years old, and I was very grateful for the experience as I learned a lot,” he says.

Sia’s newest business venture, MerryMart Consumer Corp., currently operates seven branches and has several more that are ready to open once the enhanced community quarantine (ECQ) in Metro Manila and other parts of the country is lifted. Like how he had scaled up Mang Inasal and DoubleDragon to be nationwide players, Sia has a grand vision for MerryMart. By December 2021 next year, he must have 100 MerryMart stores. By 2030, the network must have expanded to 1,200 stores and built up P120 billion in annual systemwide revenues.

Similar to the expansion strategy that brought success to Mang Inasal, franchising is expected to play a role in MerryMart’s nationwide expansion.

At just 43, Sia is bringing a second company to public hands under extremely challenging market conditions brought about by the new coronavirus disease (COVID-19) pandemic.

The Philippine Stock Exchange (PSE) and the Securities and Exchange Commission have approved MerryMart’s plan to launch an initial public offering. The plan is to sell as much as 1.594 billion primary common shares at a maximum price of P1 each. Pricing will be finalized on May 22 while the retail offering, underwritten by PNB Capital & Investment Corp., will run from May 27 to June 5.

MerryMart will become only the second retail play in town—after Puregold Price Club—that’s in the purely nondiscretionary segment. This segment—which includes groceries and pharmacies selling essential goods that people consume in good times or bad—are seen resilient to the looming economic recession caused by COVID-19 and the consequent lockdown measures.

Sia believes that the current global public health crisis is an opportunity to pitch a new retail play that focuses on essential or nondiscretionary goods. It’s a low-margin high-volume business, and this is where seven decades of grocery store experience across three generations and Sia’s own track record in scaling up and partnership-building (a former rival in the fast-food business, Jollibee founder Tony Tan Caktiong, is now a business partner at DoubleDragon) will be invaluable. His two younger siblings—Ferdinand, a lawyer, and Rizza Marie Joy, a CPA—who have been just as exposed to the business from the time they learned how to count, are part of the Sia triumvirate building this new empire.

Upon listing on the PSE’s small, medium and emerging board of the local bourse under the ticker “MM” this June 15, MerryMart will have a market capitalization of as much as P7.59 billion, unlocking close to P6 billion worth of additional fortune for the Sia family. About 21 percent of its shares will be held by the public.

MerryMart, although independent of DoubleDragon Properties, is likewise seen to unlock synergies with the latter.

“Other than some of the MerryMart stores that will be located in DoubleDragon’s various properties, MerryMart will complement DoubleDragon more significantly as a tenant in its string of CentralHub Industrial Warehouse Complexes for MerryMart’s distribution centers around the country,” Sia says, adding that MerryMart would anyway need such hubs around the country to improve logistics and operational efficiencies.

Sia will also bring MerryMart to the digital space, but only to complement offline ope­ration, which is still expec­ted to be the main cash cow.

“For grocery and pharmacy nondiscretionary retail, we believe the online market will always be minimal because groceries will always be more expensive to have them deli­vered in your place. Customers have to pay for convenience by paying concierge fee and delivery fee due to the natural limited margin of groceries and pharmacy retail,” Sia says.

The massive shift to digital channels will likely be more pronounced in the high-margin discretionary department store items, Sia says, because eventually the products will be far cheaper to buy from online channels.

“As department stores normally get 35 percent from the department store concessionaires, while online retail e-commerce platforms like Lazada normally only get 10 percent, there is a big gap in margins,” Sia says.

“I also believe that companies like the Jollibee Group will also maintain good volume for dine-in business will remain strong in the long term, as fast food will also be more costly to have them delivered just like the grocery and pharmacy items.”