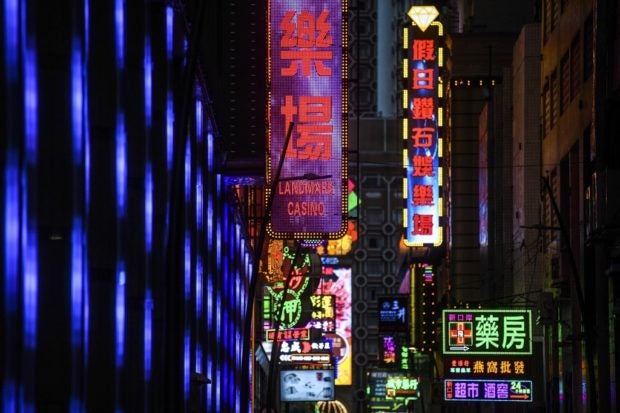 Neon signage for the Landmark Casino (C) is seen in Macau on January 22, 2020, after the former Portuguese colony reported its first case of the new SARS-like virus that originated from Wuhan in China. (Photo by Anthony WALLACE / AFP)

Macau’s gaming revenue was virtually wiped out in April as casinos suffered their worst month on record owing to measures put in place to prevent the spread of coronavirus in the tourist-dependent city.

Figures from the Gaming Inspection and Coordination Bureau showed gross gaming revenue of 754 million patacas ($95 million) last month — a drop of 97 percent from the $3 billion raked in during the same period last year.

The former Portuguese colony shuttered all its casinos for two weeks in February as the virus burst out of central China but while they have since reopened, anti-virus measures still mean mainland visitors cannot enter the city, leaving casino tables devoid of gamblers.

Some of the big operators are hemorrhaging millions a day in operation costs.

But unlike many global businesses taking a hit during the global crisis, Macau’s major casinos are well positioned to weather the current maelstrom as they sit on huge piles of cash from the boom times.

And unlike many Las Vegas operators, they do not have sizeable debt piles.

In a client note from early April, JPMorgan Chase analyst DS Kim said operators “have ample liquidity to survive this unprecedented period of ‘near-zero revenue’ for over a year”, Bloomberg News reported.

Galaxy Entertainment, for example, ended 2019 with $6.8 billion in cash reserves.

But the colossal drop will hit Macau’s government hard as it draws as much as 80 percent of its revenue from the gaming sector.

Many analysts expect Macau’s fortunes to rebound in the early summer if travel restrictions are lifted and share prices have risen from their near four-year low back in March.

The hub made impressive strides against the coronavirus outbreak and has not discovered any new cases for the past 20 days.

Neighbouring Hong Kong has also not reported a new case for five days.