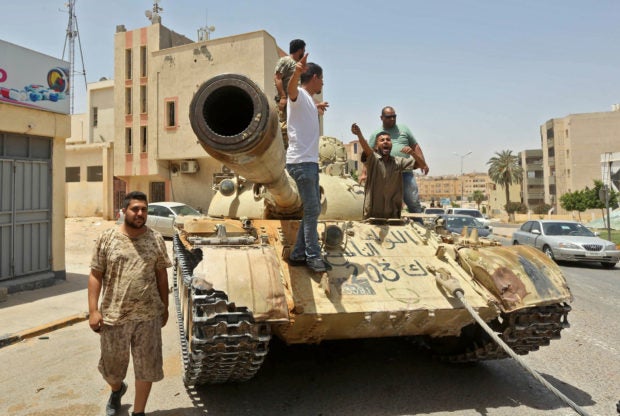 Fighters loyal to Libya’s UN-recognised Government of National Accord stand atop a tank in the town of Tarhuna. (AFP)

CAIRO — A unit affiliated with Libya’s east-based forces that have been trying to capture Tripoli but are now on the retreat, ordered the country’s largest oil field to halt work just hours after it restarted operations, the national oil company said Tuesday.

Armed groups stopped oil production at the Sharara field on two occasions in just 24 hours, the corporation said. Hours after one military commander allowed the oil to start flowing again, another group stormed the field and shut the valves. The company said that force majeure — a contract clause that refers to the inability of the company to meet its obligations because of extraordinary events — remains in effect.

The dizzying series of developments in Libya’s oil fields come after militias allied with the U.N.-government in the Libyan capital, backed by Turkey, gained the upper hand in the fighting last week. The militias retook the capital’s airport, all main entrance and exit points to the city and a string of key towns near Tripoli, forcing rival Libyan forces commanded by Khalifa Hifter to pull out.

Hifter has waged a year-long campaign trying to capture the Libyan capital, with thousands killed in the fighting, including civilians, and tens of thousands displaced.

The National Oil Corporation said Brig. Mohammed Khalifa, the commander of the oil facilities guard force in the country’s south, which answers to Hifter, disrupted operations at the Sharara oil field, about 900 kilometers (560 miles) south of Tripoli.

It said it instructed the employees to reject “any military orders” regarding the operating and the maintenance of the field. Two engineers at the field said they had halted operations early Tuesday, and the field had shut down. Later, an oil engineer said that production had resumed, only to be cut off once again. They spoke on condition of anonymity because they were not authorized to brief the media.

On Monday, the Tripoli-allied forces advanced toward the strategic coastal city of Sirte, which has been in Hifter’s hands since last year and represents the gateway to oil facilities in Libya’s south.

The oil company had previously announced the resumption of production at the Sharara field, following negotiations with the tribes to end its closure, in place since January. Production also resumed on Monday in the al-Feel oil field, it said.

Oil, the lifeline of Libya’s economy, has long been a key factor in the civil war, as rival authorities jostle for control of oil fields and state revenue. Libya has the ninth largest known oil reserves in the world and the biggest oil reserves in Africa.

Hifter’s forces have painted their recent defeats as tactical measures to give the U.N.-backed peace process a chance. But the Tripoli-allied militias said Monday they were determined to take Sirte, once a stronghold of the Islamic State group in Libya.