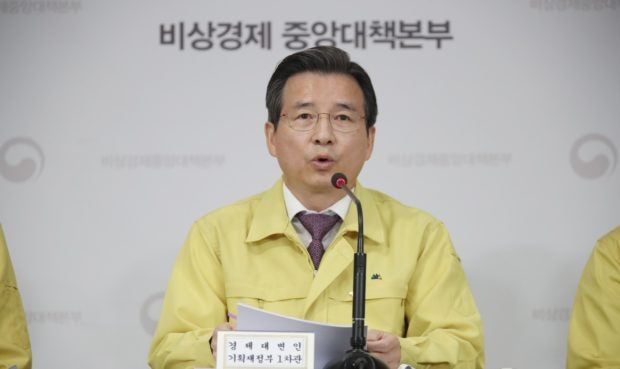 Vice Finance Minister Kim Yong-beom speaks at a press briefing held at the Central Government Complex in Seoul on Thursday. (Yonhap) via The Korea Herald

SEOUL — South Korea is seeking to reshape its economy in the post COVID-19 era by invigorating the convergence of new and old industries and creating more jobs, through its latest economic stimulus measures dubbed the “Korean New Deal,” the government said Thursday.

Borrowing the policy concept from the New Deal — a Great Depression-era set of government projects in the US in the 1930s — Korea’s Finance Ministry pledged large-scale investments and a systemic overhaul for the package to pursue new growth engines for the nation’s economy that has been hit by the pandemic. Focused on accelerating digitalization of the industries, the three pillars of the package are establishment of digital infrastructure, fostering of industries that are online or do not require physical contact and digitalization of infrastructure.

“The Korean version of the New Deal Project focuses on digital-based projects, which creates great synergy with private investments or businesses and allows creation of jobs,” Vice Finance Minister Kim Yong-beom said at a press briefing that took place after an economic meeting of government officials.

“It is an innovative infrastructure that could work as a foundation for all industries and areas and was selected (carefully),” he added.

The government also unveiled 10 key projects under the three pillars, including strengthening infrastructures for sustainable data, expansion of data collection and usage, early establishment of 5G network infrastructure, expansion of artificial intelligence data and its usage throughout industries, bolstering cloud and cyber security and more.

On concerns that the new package would only hand more clout over 5G and artificial intelligence technologies to conglomerates, Kim vowed that the government would “not allow room for blind spots” or “polarization” in the implementation. Large companies such as Samsung, SK Telecom and KT have had the upper hand on the development and distribution of 5G and AI technologies in Korea so far, compared to small and medium-sized enterprises in the same fields.

Kim also denied that the expansion of online services that promotes nonphysical contact could translate into the institutionalization of telemedicine. The measure seeks to strengthen the infrastructure and temporarily expand pilot projects linked to remote monitoring and examination of areas with restricted access to basic health care, he added.

Details, including the size of the investment and systemic overhaul plans, are slated to be announced in June through a task force formed for the nation’s New Deal project, according to the ministry. The task force will consist of government officials and private experts.

South Korea’s economy shrank 1.4 percent on-quarter in the January-March period of the year, marking the sharpest quarterly contraction since the last quarter of 2008.

“Due to the drop in oil prices, issues with manufacturing and contraction of demand, exports in April saw the sharpest drop since the 2008 global financial crisis and the uncertainties will likely continue,” Kim said.