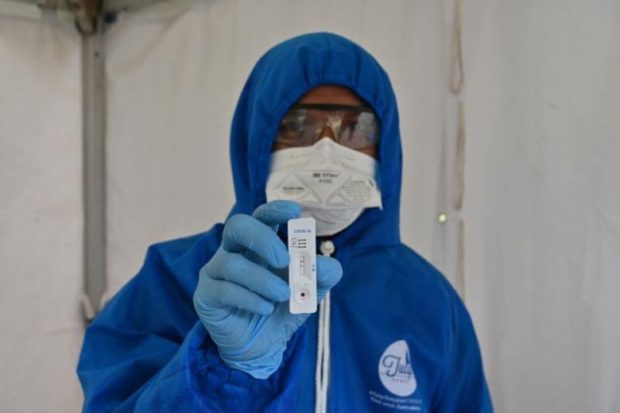 The move to produce test kits locally is to reduce reliance on imports. AFP via The Straits Times/Asia News Network

JAKARTA — Indonesia’s unicorns and start-ups have joined forces to produce test kits locally, a move that may help President Joko Widodo achieve his target of doubling testing capacity for Covid-19 as cities across the world’s fourth most populous country gradually lift restrictions.

A unicorn refers to any tech start-up that reaches US$1 billion ($1.39 billion) in market value.

Unicorns Tokopedia, an e-commerce platform, and Traveloka, an airline ticketing and hotel booking company, were among several companies and individuals contributing monies to the Indonesia Pasti Bisa (Indonesia Can Do It) initiative, which comes under the auspices of Indonesia’s Agency for the Assessment and Application of Technology (BPPT).

Jakarta-based genomics technology start-up Nusantics was appointed by the government to design the test kit prototypes, which it did for free.

The firm’s chief executive Ms Sharlini Eriza Putri told The Straits Times on Tuesday (June 9) the prototypes were validated by laboratories across Indonesia in May as being equivalent to those imported.

These laboratories comprise those appointed by the government to carry out PCR tests.

State-owned pharmaceutical company Bio Farma has produced and distributed 100,000 test kits based on the Nusantics prototypes.

BPPT deputy chief Soni Solistia Wirawan said the test kits are more suited to local needs as they are being produced based on samples taken from coronavirus patients in Indonesia.

The move to produce test kits locally is to reduce reliance on imports.

Indonesia had orders of test kits made overseas cancelled and in some instances, hijacked by other countries, as it grappled with the coronavirus which has infected more than 33,000 people and killed over 1,900.

The funds raised in the initiative were used to procure raw materials for the prototypes, manufacture the final test kits as well as pay for transporting them to laboratories across Indonesia.

“The challenge going forward is to always monitor the virus mutation, to regularly check if the test kits need updating,” Ms Sharlini said.

Cities across Indonesia have moved to ease restrictive measures three months after the first local coronavirus case was detected.

Jakarta, the epicenter of infections in the country, entered a “transition phase” on June 5 with places of worship and workplaces allowed to open amid strict health guidelines, which include operating at only 50 percent capacity.

Shopping centres in the city are slated to open in mid-June.

The president also stressed that aggressive contact tracing measures using communication technology – such as the mobile GPS – must be introduced quickly.

Before June, Indonesia had one of the lowest testing rate among countries with a population of 50 million or more, according to pandemic data site Worldometer.

But the country of 270 million is no longer near the bottom of the list, having achieved a test rate of 1,570 for every 1 million population, Worldometer data showed.