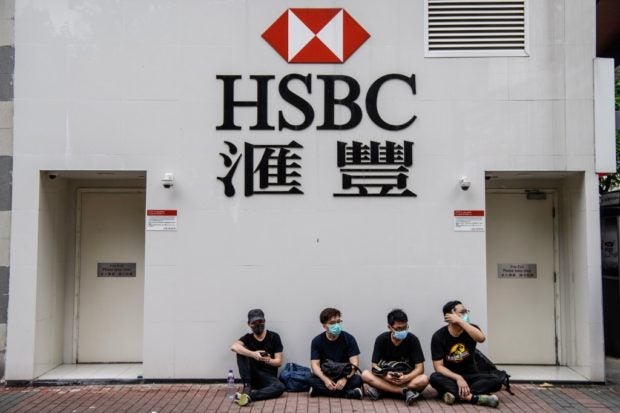 Protesters sit outside a HSBC in the Kowloon district of Hong Kong on August 11, 2019, in the latest opposition to a planned extradition law that was quickly evolved into a wider movement for democratic reforms. Photo by ANTHONY WALLACE / AFP

The London-headquartered lender last week backed Beijing’s contentious legal proposal for Hong Kong, which critics fear will be used to stamp out dissent in the city.

HSBC’s announcement angered business and political circles in Britain, which returned the former colony to Chinese rule in 1997.

The bank’s decision flew in the face of convention because most multinationals attempt to steer clear of political intervention.

However, HSBC’s top Asia executive, Peter Wong, has signed a petition in support of the law.

In addition, London-listed bank Standard Chartered — which also focuses primarily on Asia — sided with Beijing over the law.

“The UK-listed banks have taken China’s side as it is clear they want to cosy up to the second largest economy in the world,” said CMC Markets analyst David Madden.

Asia remains critical for HSBC because the bank generates the majority of its profits in the region.

The lender’s chief executive Noel Quinn announced plans this year to axe 35,000 jobs as HSBC strengthens its focus on Asia and trims fat from less profitable activities in Europe and the United States.

HSBC — or the Hong Kong & Shanghai Banking Corporation — is closely linked to the history of the former British colony.

The bank was founded in Hong Kong and Shanghai in 1865 — but has been based in Britain since 1993.

“HSBC is synonymous with Hong Kong – the website and bank cards feature the skyline, the HSBC building in Hong Kong is an iconic one, and the firm employs around 30,000 people in Hong Kong,” said Emma Wall, head of investment analysis at broker Hargreaves Lansdown.

“To those outside of the region it may therefore come as a surprise that HSBC, and other firms such as Standard Chartered, have put up no resistance to the recent divisive bill.

“But ultimately, any corporate decision will be made with future revenues in mind — and for HSBC half of their revenues come from Asia,” she added.

But the bank’s decision has been met with anger from prominent politicians in Britain.

Lisa Nandy and Anneliese Dodds, leading lawmakers in the main opposition Labour party, have meanwhile written to both banks to express concern.

US Secretary of State Mike Pompeo criticized the bank for backing the law, calling it a “cautionary tale” and warning of businesses’ overreliance on Beijing.

“That show of fealty seems to have earned HSBC little respect in Beijing, which continues to use the bank’s business in China as political leverage against London,” Pompeo said in a statement.