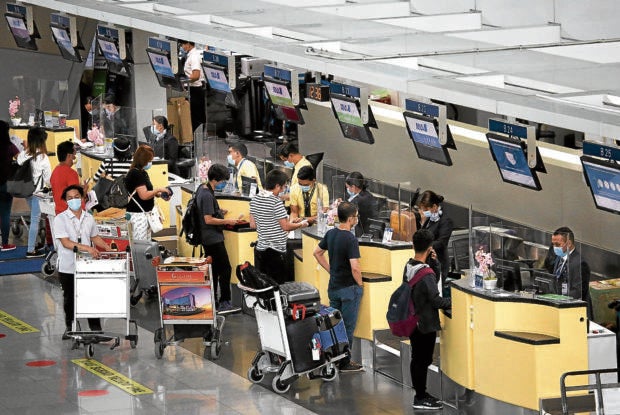 In this file photo, passengers check in for their international flights after Naia resumed operations at the height of the enhanced community quarantine period in March. A group of tycoons last week announced a decision to drop plans to modernize the gateway after failing to sway the government to relax terms and adjust amid the pandemic.

Shortly after terminating discussions with a super-consortium backed by seven of the country’s biggest conglomerates for the rehabilitation of the Ninoy Aquino International Airport (Naia), the government has given the next-in-line proponent, Megawide Construction Corp., the right to modernize and operate Metro Manila’s main international gateway under a long-term concession.

In a disclosure to the Philippine Stock Exchange on Friday, Megawide said it had received a letter dated July 15 from the Manila International Airport Authority (MIAA) granting it the original proponent status (OPS) for the redevelopment of Naia.

Megawide’s consortium, which also includes GMR of India, is the group behind the redevelopment of the Mactan Cebu International Airport (MCIA), having won the public bidding in 2013.

Manuel Louie Ferrer, Megawide director and president of GMR Megawide Cebu Airport Corp., said on Friday that the group would now review the terms of reference presented by the government.

The government’s proposed framework calls for a 15-year Naia concession.

OPS is a formal recognition of the private sector proponent for the project, after which the fineprints will have to be drawn up and finalized.

Once the framework is finalized, the terms will be subjected to a Swiss challenge, which means other parties will be invited to challenge Megawide. But as original proponent, it will have the right to match the best alternative offer.

Back in 2018, Megawide-GMR submitted a $3-billion unsolicited proposal to upgrade and rehabilitate the highly congested Naia under an 18-year concession. The proposal then was to increase airfield capacity to 950 to 1,000 aircraft movements a day, a 30 to 35 percent increase from estimated daily movements at that time.

As the parties were unable to come up with mutually acceptable terms since then, the government and the super-consortium recently terminated their discussions, giving the opportunity for Megawide to reenter the picture.

Section 10.6 of the Build-Operate-Transfer law’s implementing rules states that the “second complete proposal will only be entertained if the first one is rejected.”

As a young company, Megawide takes pride in being “agile.”

At the MCIA as well as the Parañaque Integrated Terminal Exchange (PITX), the group has tapped contactless technologies to mitigate the risk of COVID-19 transmission. Contactless inter-phase for check-in, purchases and inquiries are currently being rolled out at MCIA.