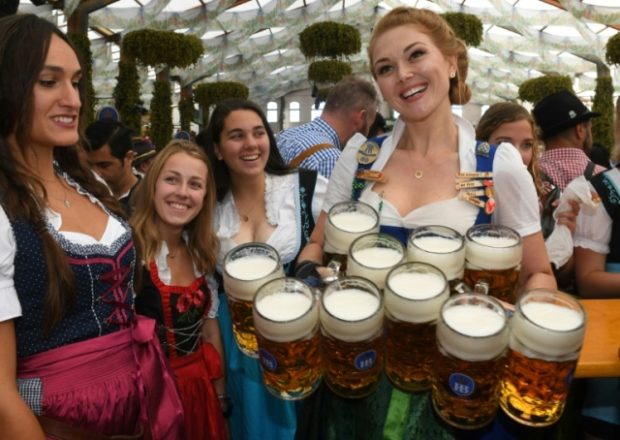 No beer here — Bavaria’s legendary Oktoberfest is off this year due to coronavirus. Image: Christof STACHE – AFP/File

Bavaria on Tuesday canceled the iconic Oktoberfest for the first time since World War II dealing a fresh blow to Germany’s beer industry already hard hit by the coronavirus pandemic.

The event, which takes place annually from late September to October, was expected to draw six million visitors, but it would be too dangerous “as long as there is no vaccine,” Bavaria state premier Markus Soeder said.

Even with masks and social distancing, the threat of contagion was too high.

“Living with the coronavirus means living carefully,” he said.

This year marks the first time that Germany will have to do without the festival since the last world war.

But Oktoberfest has previously fallen victim to other epidemics — cholera kept the beer tents empty in 1854 and 1873.

From hops growers to breweries, the German beer industry had already been staring at a morose season.

But the Oktoberfest cancellation was a further devastating blow with an impact stretching beyond the festival to the gastronomy and hospitality sectors.

Adolf Schapfl, 58, owns a farm of about 80 hectares in Hallertau, the small Bavarian region where 90% of Germany’s hops are grown.

Crouching down on the soft earth of his hop field, Schapfl surveyed the plants emerging from the ground with a mixture of pride and anxiety.

Mid-April is usually the time when the plants would be tied to splints, he explained, so they grow to several meters tall by August harvest time.

“This year, I don’t have the manpower for it,” he said.

More than a thousand hop growers in Hallertau are still waiting for seasonal workers to arrive from Poland and Romania.

With European borders closed to limit the spread of the coronavirus, many of the workers are stuck at home.

Schapfl, who is also president of the Association of German Hop Growers, would normally have around 20 Polish workers on his farm at this time of year. Right now, there are four.

“I don’t want to be dramatic, but without a harvest, the risk for us is bankruptcy, and for Germany, a beer shortage next year,” Schapfl said.

Germans drank an average of 102 liters of beer each in 2018 — in Europe, only Austrians and Czechs drink more.

The sector is in discussions with the government, which has already permitted other seasonal harvest workers to be flown into Germany on special charter flights.

An online portal has also been launched for Germans who wish to apply to work in the fields. “It’s difficult work, but I hope it works,” Schapfl said.

In the meantime, his three grown-up children have been lending a hand on the farm.

A few kilometers from Schapfl’s farm, at the other end of the production chain, brewer Andreas Weber, 25, has different reasons to be worried.

With restaurants and bars closed and all this summer’s festivals canceled, the young beer connoisseur employed by the Urban Chestnut Hallertau Brewery said demand for artisan beers is falling through the floor.

“We are not the worst affected because only 10 or 15% of our production goes into gastronomy. But if this goes on for several more months, it’s going to get complicated,” he said.

In the room where the hops ferment in huge metal vats, nothing seems to have changed.

“Don’t worry, we are still producing,” Weber smiles, picking out a glass to taste his beer straight from the source.

However, the drop in production has forced the brewery to cut its three employees’ working hours — like in many of Germany’s 1,600 breweries. NVG

After a long day of lockdown, how ‘essential’ is a drink?