First in 75 yrs: Victory Liner laying off hundreds of workers 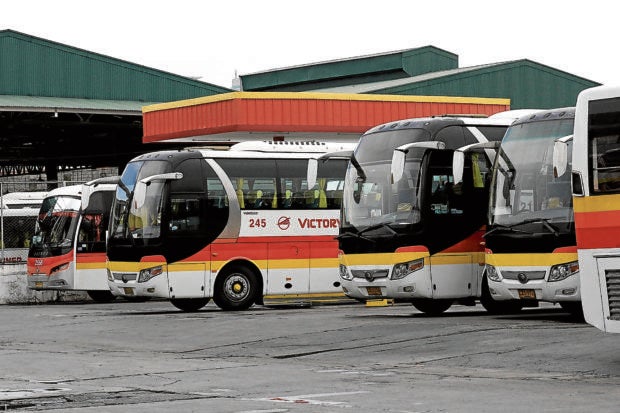 For the first time in its 75-year history, bus operator Victory Liner Inc. (VLI) is laying off hundreds of employees to stay afloat amid the tough economic and regulatory environment shaped by the coronavirus pandemic.

VLI, one of the biggest bus operators in Luzon with a fleet of about 1,200 units, will dismiss an initial batch of 100 regular employees and 309 probationary workers this month.

In an interview on Friday, Victory Liner operations manager Alex Briones said more job cuts affecting 500 to 600 people—mostly conductors, mechanics and administration personnel—will have to follow as soon as the government finalizes an order to modernize public utility vehicles.

UNCERTAIN FUTURE A monthslong lockdown prompted by the coronavirus pandemic has forced Victory Liner and other transport companies to scale down operations, with their vehicles garaged indefinitely and much of the workforce soon to be rendered jobless. —RICHARD A. REYES

As bus operators switch to cashless payment systems as ordered by the government, Briones said, VLI would have to lay off all its remaining 1,000 conductors.

With the company’s finances already bleeding due to the lockdown measures imposed in mid-March, including a 50-percent limit on the passenger capacity of public utility vehicles, Briones said VLI would have to shell out P1 million to P1.5 million per bus to modernize its fleet and meet the requirements of the Land Transportation Franchising and Regulatory Board (LTFRB).

The buses, for example, must be installed with cashless payment systems and their seats reconfigured for proper social distancing.

He said the company would have no choice but to streamline its workforce, as failure to comply with LTFRB standards may cause VLI to lose its franchise.

“This is the first time [in] over 75 years that VLI will cut down its labor force. Victory Liner survived World War II, martial law (during the Marcos regime), Mt. Pinatubo, severe earthquakes and other natural disasters and kept its family of drivers and conductors together,” Briones said of the company, which began operations in 1945 shortly after the war, making it the oldest and the largest bus firm in Luzon.

“Now, due to government’s policies, especially (the required) load reduction by 50 percent, Victory Liner has no choice but to let go of its employees, just to survive the postpandemic world,” Briones said.

First to be hit

Gerry Danila, president of Nagkakaisang Lakas ng Manggagawa Union of Workers of VLI, said bus drivers and conductors dependent on fixed wages and commissions would be the first ones to be hit by the government order to reduce bus load capacity.

He said the union understood VLI’s predicament and remained supportive of the management, which in turn continued to support employees throughout the pandemic.

“Operating at 50-percent load … will mean that bus drivers and conductors will have a reduced daily take-home pay. It will not be the bus firm that will sustain heavy losses, but it’s the bus drivers and their families who will suffer first. We will now have half of the salary we used to bring home to our families,” Danila said.

Over the past three months, the government has suspended public bus operations in Northern and Central Luzon and the National Capital Region, where Victory Liner operates.

Of the company’s 1,200 buses, only about 20 are currently in operation, all serving the Olongapo-Sta. Cruz route in Zambales province.

“We are not earning money from this because of the 50-percent load factor and because it’s a short distance route,” Briones said. “We’re really doing it for the public because we really want to help the local government, but we’re really losing [money] in that route.”

The company had to tap fresh bank loans to sustain its operations and continue providing P5,000 in monthly assistance to employees during the lockdown.