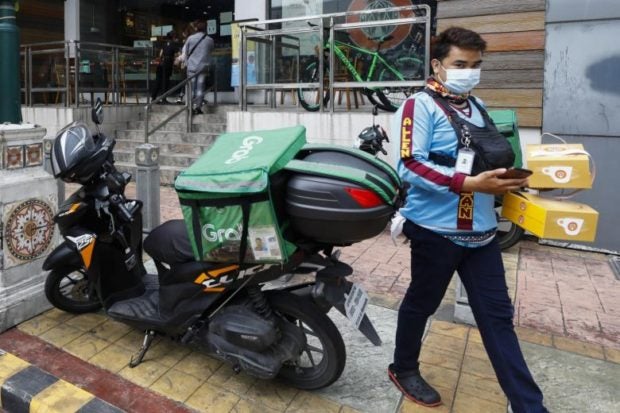 A food deliveryman in a village in Quezon City, Metro Manila, Philippines, on Aug 7, 2020. EPA-EFE via The Straits Times/Asia News Network

MANILA, Philippines — By 1 pm, dietitian Violah Koh, 39, has already received her fifth package of the day: two plants, pots and some garden soil.

Throughout the morning, a kilo of tilapias, a bagful of onions, garlic and ginger, and a powerbank were delivered to her doorstep. Still to arrive is an order of iced coffee from Dunkin’ Donuts.

“I try not to go out if I can help it. Good thing that now you can buy almost anything online,” she says

With at least two million without jobs and over 83,000 businesses shuttered because of the coronavirus pandemic, people here are trying to eke out a living selling anything they can online or knocking on doors from one house to another.

Pilots and flight attendants have hung up their snazzy uniforms and now driving around Manila to deliver dim sum. A popular rapper raps jingles on his Facebook and YouTube accounts to promote his fried chicken business.

Those living in gated communities are setting up Facebook pages to connect buyers and sellers within the neighborhoods. Anything from rugs and air-conditioners, to a used McLaren sports car, is being traded.

Ms Jazzmin San Mateo, a senior high student, says her 40-year-old mother began selling noodles, spring rolls and fried bananas online after she was furloughed from her job as a payrolls officer in June.

Her mother always had a knack for cooking, and had been supplementing her income with a makeshift food stand in front of their home, she adds. The single parent supports four school-going children.

“My mother doesn’t know when she’ll be called back to work,” says Ms San Mateo. So for now, they are all relying on her mother’s cooked food sales to get them through the day.

It’s a tough job that affords little time to rest, and everyone in the family has to pitch in to keep the money coming, she says. Ms San Mateo says she’s the social media marketer and helps her brother with the deliveries.

“But I can see my mother’s happy, even with the modest profit, especially when she receives glowing feedback for her cooking and she sees us not going hungry,” she says.

Those who do not have the means to go online are bringing what they have to sell directly to their customers’ homes.

Mr Albert Terejesas, 26, and his wife walk about 10 km a day to sell fish, shrimp and squid from one home to another.

His mother used to have a vegetable stall in a public market. But when much of the country was shut down in March, people stopped coming. So, around April, he decided to go to the buyers instead.

He and his wife would head to a fisherman’s wharf very early in the morning and fill two pails with seafood that they load onto a bicycle, and begin knocking on doors.

But it is a daily grind or they’d have no income. He constantly worries about getting sick. He has two children, aged one and four.

For now, the demand is there.

With some 27 million still under shelter-at-home restrictions and a still-raging coronavirus outbreak, seven out of 10 Filipinos living in the capital are buying most of the stuff they need online.

Data released by the government showed a 6.6 percent growth in the communications and information sector.

“What that data is telling us is that there is high demand for telco services due to a surge in demand for e-commerce,” Economic Planning Secretary Karl Chua says.

Mr Roland Gonzales, 37, started delivering for GrabFood in June, after the printing company he was working at wound down as sales plummeted.

He says he is still working his way up GrabFood’s accreditation ladder. He makes up to 600 pesos from four trips a day, enough to cover for the income he lost at his previous job.

The more seasoned drivers make at least eight deliveries a day, he says.

While there is a huge demand for online goods and services, the margins for most sellers are not very large, and many of them would rather go back to their old, regular-paying jobs.

“It’s not a windfall,” says Ms San Mateo, whose mother makes about P400 a day selling food online. That is less than the P500  minimum wage in Metropolitan Manila.

Her brother, who is in college, has had to skip school this year, and she is not sure if she will be able to purchase the laptop and phone she needs for online schooling.

“I guess we just have to help each other out to get through this,” she says.

The market for those hustling online is expected to be there as long as a virus-wary population continues to shun malls, public markets, department stores, groceries and restaurants.

Mr Steven Tan, president of the country’s largest mall chain SM Supermalls, says he does not expect foot traffic to pick up till December. All its tenants had to shutter when a sweeping two-month lockdown was imposed in March.

Overall, while the online gig economy is providing a lifeline to those who have lost their jobs or had to shut down their businesses, it is in no way supplanting gainful employment or a fully operational business.

Mr Jan Vincent C Robles, 32, sells 40 pieces of shawarma a day from home via GrabFood or Foodpanda, at about 100 pesos each.

He is now thinking of renting a food stall along a busy road to augment his income if he can’t restart his audio and lighting business. He used to make much more renting out equipment for weddings and birthday parties.

Mr Gonzales, the GrabFood rider, says although he earns slightly more now, he’d still rather go back to his old job.

“The hours are fixed, and it’s still safer to be inside an office than being on the road riding a motorcycle all day, with the virus still out there,” he says.