Disney to see at least $1.4 billion impact from coronavirus 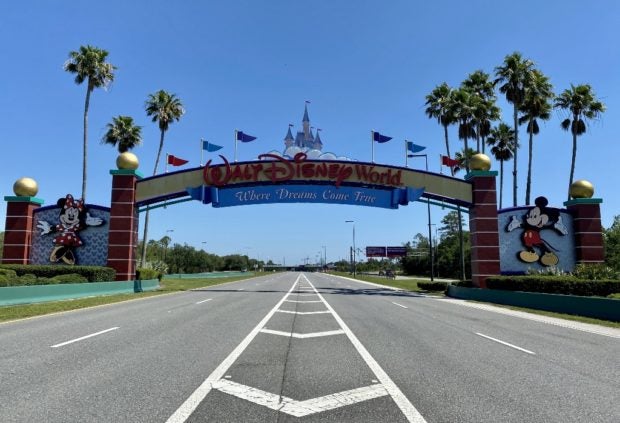 An empty road leads into a deserted Disney resort after it was closed due to the COVID-19 pandemic in Kissimmee, Florida on May 5, 2020. Image: Daniel SLIM/AFP

Disney shares swung down some 3% in after-hours trade following the earnings for the company which has the largest Hollywood film studios, cruise and theme park operations and the ABC television network along with the ESPN sports channel.

Revenues from its “direct to consumer” operations which include the new streaming platform to rival Netflix, jumped to more than $4 billion in the fiscal second quarter. But the unit lost $812 million due to expenses from its rollout.

The new Disney+ service had some 33.5 million subscribers at the end of March, the company said.

“As a result of COVID-19, we closed our domestic parks and resorts, cruise line business and Disneyland Paris in mid-March, while our Asia parks and resorts were closed earlier in the quarter,” the earnings statement said.

The studio entertainment operations saw slight revenue gains and a modest dip in operating profits, as the pandemic hit at the end of the quarter during which it released “Frozen II” and “Star Wars: The Rise of Skywalker”.

Analyst Ross Benes at eMarketer said the pandemic impact is likely to continue for Disney.

“The COVID-19 pandemic transformed some of Disney’s greatest strengths into its greatest vulnerabilities,” Benes said.

“Theatrical releases and theme parks, long-time profit centers for the company, are losing money in the short-term and have no clear path to recovery until improved treatments or vaccines make consumers comfortable to venture back out into large crowds.”

The analyst said the impact was cushioned in part by the new streaming service but that “now TV networks are under increased pressure with canceled sports and content production postponements occurring alongside declining ad prices and cord-cutting.”

Chapek said Disney will maintain a cautious approach in reopening its facilities as the world recovers from the coronavirus outbreak.

“The approach we take may include implementation of guest capacity and density control measures as well as health and prevention procedures,” he said.

He noted that the company plans to reopen its Shanghai park on Monday and added that “we are seeing encouraging signs of a gradual return to some semblance of normalcy in China and in light of the lifting of certain restrictions in recent weeks.”

The attraction in China’s most populous city will use temperature screening, scannable health barcodes and social distancing measures as it opens.

The coronavirus emerged in China late last year, and rapidly spread across the country including Shanghai.

But while the disease has proliferated in much of the western world, cases have plummeted in China. NVG

A look at entertainers, entities on hold over coronavirus