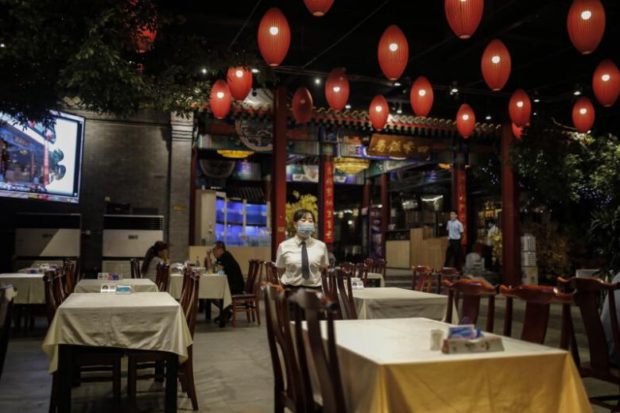 A waitress standing in a near-empty restaurant amid a wave of new Covid-19 cases in Beijing on June 20, 2020. EPA-EFE via The Straits Times/Asia News Network

BEIJING — On any given weekend, Beijing’s hottest coffee shop, Metal Hands, is usually heaving with coffee snobs and young people posing for the cameras amid its industrial chic-meets-vintage surrounds.

But on Sunday (June 21), the first weekend since the municipal government notched up the city’s emergency response level to the second highest, only a few tables were taken in the early afternoon while an outdoor terrace was shut because of the coronavirus outbreak.

“It’s the best time to come here, because you have plenty of room to take your pictures instead of jostling with the crowds,” said 22-year-old art student Li Qin, who was taking turns with a friend to pose along a corridor shaped by brass pipes.

Infection numbers in the capital city have been steadily climbing since the first case emerged on June 11.

On Sunday, Beijing reported another 22 cases out of the 26 new infections nationwide, taking the number in the capital city to 227 people, nearly all linked to the Xinfadi whole food market in south-western Fengtai district.

This latest outbreak in Beijing has dealt yet another blow to the food and beverage industry, which was just crawling out of months of a shutdown and then gradually shedding social distancing rules that have crimped its business.

Just as diners were returning with back-to-usual queues on the weekends at popular establishments, restaurants are now facing disrupted food supplies, jittery customers and another slew of regulations, including mandatory testing for all wait and kitchen staff after restaurant workers were found to be infected.

District officials have ordered some to cut their operating hours, while bars in Sanlitun, best known for its nightlife scene, have been made to shut.

Among the worst hit have been Japanese restaurants, after news broke that the coronavirus was found on a chopping board for imported salmon at the Xinfadi market.

That prompted the authorities to halt imports of the fish from Europe, and supermarkets to pull it off their shelves.

China on Sunday also banned frozen chicken imports from Tyson Foods after an outbreak at the company’s US production plant.

Japanese restaurant owner Chris Niu, 35, said when Beijing announced it was raising its alert level last week, he decided to close his shop the next day.

“Our staff’s safety is most important. Even though the infection numbers were still low, we didn’t want them to take the risk. We also have a responsibility to our diners,” said Mr Niu of his restaurant, Beyond Yakitori, in Sanlitun.

“We want to give them an enjoyable dining experience, and if they can’t enjoy it at 100 percent, then there’s not much point.”

He continues to pay his 10 staff half their salaries, a similar arrangement to when he had to shut his business between the end of January and mid-April because of the outbreak in China.

Those that have remained open the past week say they have seen their business dip between 30 and 70 percent.

Restaurateurs also have to contend with differing rules, with some districts barring eateries within their zone from selling imported seafood, while others are prohibited from serving salmon.

Singapore seafood chain Jumbo Group, which has one Beijing outlet in the upscale SKP mall, said it has been told that it cannot sell live seafood from the local market, and it is sourcing for alternatives.

Its crab and lobster supplies are not affected as they come from Shanghai.

Mr Kang Shi, 45, who has five shops in various office buildings selling fast food, said his business was just getting back on track after hitting a low in February, when his takings were just 20 per cent of the usual.

“This epidemic has gone on for months. We were mentally prepared for a rebound, so my staff and I aren’t stressed out about it,” he said.

“We’re not looking to the government for a handout. If it can control the epidemic well, and people in our office blocks can keep working, then our business will be okay.”