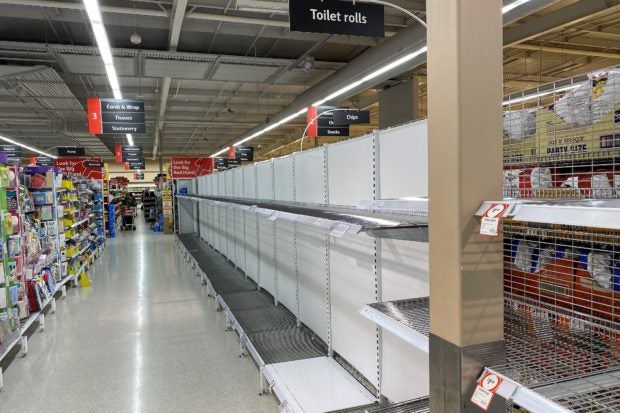 Shelves usually stocked with toilet rolls are seen empty in a supermarket following panic buying in Sydney on March 8, 2020. – AFP

SYDNEY — Australia’s vast swathes of farmland produce enormous quantities of food each year, delivering more than the nation can consume.

Yet, during the onset of the Covid-19 outbreak, Australian stores experienced sudden shortages of staples such as flour, rice, mince meat and sugar.

The unusual sight of these empty shelves around the country demonstrated that its supply chains have become increasingly vulnerable and is prompting a rethink about how to protect the nation’s food security.

The worst of the shortages occurred in March as the numbers of Covid-19 cases were rising and the nation prepared to go into lockdown.

This prompted panic buying, which led to empty food shelves, even in the major supermarket chains.

Stores were forced to introduce limits on purchases of items such as eggs, pasta and sugar and to suspend online deliveries.

The shortages were a surprise for Australia, which is something of a global food bowl and has no lack of supply.

But Australia’s production process – from seed to table – is often highly dependent on the input of foreign suppliers.

Australia, for instance, has a large dairy industry and exports 41 percent of its total supply.

Yet much of the packaging involves imported plastics and other materials.

Farmers often depend on imported fertilizers and chemicals, as well as imported machinery and spare parts.

At the height of the pandemic, for instance, Chinese exports of glyphosate, a vital ingredient in the main weedkiller used in Australia, suddenly dried up, leaving farmers struggling to find supplies.

The experience has prompted some farmers to try to buy from local suppliers of machinery and other items.

But most analysts believe Australia, with a population of 25 million, cannot sustainably supply all the chemicals, machines and packaging that would allow its agricultural and food processing sectors to be self-reliant.

An agriculture sector consultant and former federal policy adviser, Mr Andrew Henderson, suggested this week that Australia should instead join with regional partners such as New Zealand, Singapore and Pacific island nations to build up collective self-reliance.

“It’s not smart for us to be self-reliant,” he told ABC News.

“If we try to do that in agriculture, our economy will retract so much it will destroy the livelihoods of many, many Australian farming families. But what we can focus on is a regional approach, becoming regionally self-reliant.”

He said Australia could support poorer countries that buy its food to develop their manufacturing processes.

Indonesia, for example, is the largest buyer of Australian wheat and could develop spare machinery parts.

Another issue that emerged was that many Australia’s supermarkets are not designed for sudden bursts of buying.

The major chains, Coles and Woolworths, have in recent years reduced the number of distribution centers, which are crucial for a large country where food can travel thousands of kilometers from farm to warehouse to supermarket shelf.

In late March, Coles opened up new distribution centers due to the sudden spike in demand.

According to a report in The Saturday Paper last month, supermarket warehouses and storage facilities hold only five days of fresh produce and about 30 days of stock of non-perishable goods.

Dr Geoffrey Annison, deputy chief executive at the Australian Food and Grocery Council, told the newspaper that the Federal Government could “nudge and encourage” grocery suppliers to increase their stockpiles.

As of Saturday (June 13), Australia had experienced 7,302 cases and 102 deaths. In the past week, Australia had 42 new cases, most of which involved Australians returning from overseas in quarantine.

The reduction in cases has allowed social distancing restrictions to be wound back and has eased the pressure on supplies.

Supermarkets are now well stocked and most customers appear to no longer be stacking their trolleys with excess supplies.