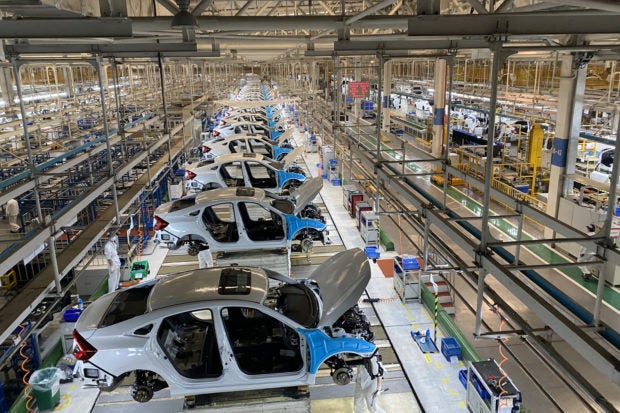 Since reopening on March 11, Dongfeng Honda Automobile has restored its production capacity to the peak level of more than 3,000 cars a day. The Straits Times/Asia News Network/ELIZABETH LAW

BEIJING — Sales figures appear to be gradually picking up, so workers in China’s car-production capital, Wuhan, have been clocking overtime. This is to make up for the loss in production after the city went into lockdown earlier this year because of the coronavirus which causes Covid-19.

The industry has suffered its worst quarter, with only 3.4 million cars sold in the first three months of this year. Car sales had been dwindling for years, and automakers were hoping for a turnaround in 2020.

But local automakers – whose clients are less affluent and more sensitive to economic disruption – could be hit hardest, with no end in sight to the global pandemic and consumers more cautious about spending.

That represents a 5.6 percent drop year on year, but it is a vast improvement from the 79 per cent plunge registered in February, the industry’s worst month, as sales came to a near standstill.

In Wuhan’s Dongfeng Honda Automobile, a joint venture between local carmaker Dongfeng Motor and Japan’s Honda, employees now pull an extra 1½ hours of overtime every shift just to fulfill the backlog of orders.

Since reopening on March 11, Dongfeng Honda has restored its production capacity to the peak level of more than 3,000 cars a day.

While there were initial concerns about unfilled order books, anecdotal evidence so far indicates that a growing number of people are keen to buy their own vehicles to avoid public transport, though most prefer foreign makes.

The Chinese market has more than 100 car brands but is dominated by foreign carmarkers, who own 60 per cent of the market share. At the top of that list is Volkswagen, which ranks China as its most important market globally.

Fitch Solutions, however, remains pessimistic about the outlook for the Chinese car market, saying in a recent report that it is likely to contract by 18.4 percent this year.

“(The contraction) will put significant financial pressure on all car brands in China, especially those who were unable to secure a significant market share such as DS, Jaguar and Suzuki,” the market insights firm said.

A government stimulus might give a boost to commercial vehicles, it added.

During the 2008 financial crisis, the Chinese government announced a mammoth financial stimulus package amounting to nearly US$568 billion – or about 7 percent of gross domestic product at the time.

Most of the funds went into infrastructure development, but the package also helped to push commercial vehicle sales up by nearly 30 percent over the next two years.

For now, though, Chinese carmarkers are struggling at home.

Geely said it would be releasing new models this month, while deliveries of backed-up orders might help improve market performance. BYD is hopeful that electric car sales will pick up, even though Beijing has cut subsidies for electric vehicles.

Many others also remain optimistic for the future.

“Customers who were unable to buy a car over the last few months are now eagerly visiting our dealers,” Mr Wollenstein wrote in a note posted on LinkedIn.

“Furthermore, we have seen interest from a new kind of customer, those keen to own a personal vehicle to escape the risks of infection on public transport – many of them first-time car buyers, a group accounting for 60 per cent of customers in China.”

During a recent visit to a Volkswagen showroom in central Beijing over the Labour Day holiday, customers could be seen milling around, ogling the vehicles on display.

The showrooms of domestic carmakers like Geely and Great Wall seemed less busy.

Mr Wollenstein believes that there could be a shake-up in the Chinese auto industry, leading to a consolidation of brands.

This is where bigger companies with their marketing heft and resources might be able to better weather the storm, said Mr Tu Le of Sino Auto Insights in Beijing.

“There are launches for new models that are set for this year, but clearly, it’s all going to be held back now, which is okay for the bigger brands because they have all the resources.

“But for the smaller companies, you can bet they will be outgunned and outspent when it comes to promotional and marketing dollars.”