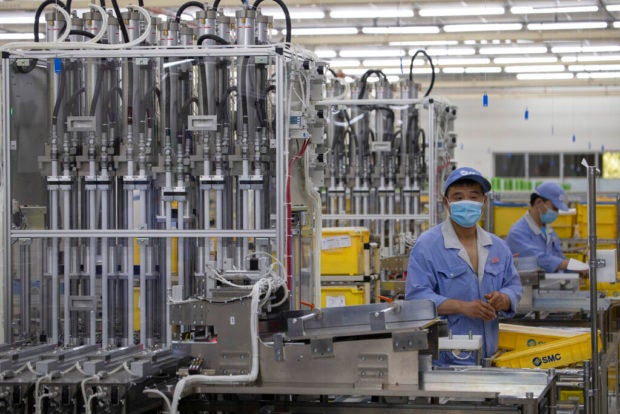 Workers at SMC, a Japanese pneumatic engineering company, assemble products at a factory in Beijing on Wednesday, May 13, 2020. Foreign invested enterprises in China are stepping up the resumption of business as the government strives to bring the country out of the economic slump caused by the epidemic of COVID-19. (AP Photo/Ng Han Guan)

Investment in factories and other fixed assets also improved as businesses reopened after China’s deepest economic slump since at least the 1960s, official data showed Friday.

China, where the pandemic began in December, was the first economy to shut down to fight the virus and the first to start reopening in March. Automakers and some other manufacturers say production is back to normal, but retailing and other industries are struggling.

Friday’s report “shows only small and gradual improvements in economic activity,” Iris Pang of ING said in a report.

The ruling party has handed out shopping vouchers, cut taxes and promised entrepreneurs low-interest loans after first-quarter activity shrank 6.8% from a year earlier.

Still, forecasters expect little to no economic growth this year.

Factory output rose 3.9% in April from a year earlier, an improvement over the previous month’s 1.1% contraction. Manufacturers have been hurt by weak demand for exports in the United States, Europe and other major markets that have closed to fight the virus.

Consumer spending, a major economic driver, shrank 7.5% from a year earlier, depressed by widespread job losses. That was an improvement on March’s 15.8% contraction but still dragged on overall growth.

Economic growth “now relies largely on domestic demand,” said Tommy Wu of Oxford Economics in a report. “Improvement in consumption momentum is likely to continue, albeit from a weak starting point.”

The scale of job losses as retailers, restaurants and export-driven factories close due to lack of demand is unclear but private sector analysts say the total could run as high as 30 million.

Investment in fixed assets, the second-biggest driver of economic growth, shrank by 10.3% from a year ago but that was better than the first quarter’s 16.1% contraction.

Consumer inflation eased to 3.3% over a year ago from March’s 4.3%, but food costs surged 14.8%. That was driven by a 96.9% jump in the price of pork due to an outbreak of African swine fever that has disrupted supplies.

Exports, reported earlier, rose 3.5% in April over a year ago, rebounding from the previous month’s 13.3% contraction. But forecasters warn exporters are likely to face a second dip as foreign buyers cancel orders.

“This will become more obvious in May as global demand weakens in response to high unemployment in the U.S., UK and European economies,” said ING’s Pang.

April auto sales, reported this week, fell 2.6% from a year earlier, but that was better than March’s 48.4% contraction in the industry’s biggest global market.