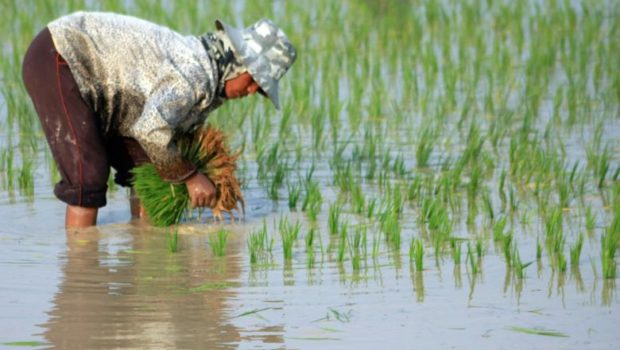 A Cambodian farmer transplants rice seedlings in the paddy field. Cambodia’s milled-rice exports gained 32.51 per cent to 410,563 tonnes in the first half of this year from the 310,366 tonnes shipped in the same period last year. Post Staff

PHNOM PENH — Cambodia’s milled-rice exports gained 32.51 percent to 410,563 tonnes in the first half of this year from the 310,366 tonnes shipped in the same period last year.

General Directorate of Agriculture director-general Ngin Chhay told The Post that paddy varieties bred from pure line selection of traditional varieties led to the surge in exports to cater to the rising international demand amid the Covid-19 epidemic.

The rise in exports extended to newly-opened markets such as Hong Kong and Australia, cracking the 40,000 tonne mark, he said.

“The rise in milled-rice exports can be attributed to the purity and calibre of Cambodia’s fragrant rice varieties, which dovetails with the markets’ needs.

“Of note is the new ‘01’ variety of paddy grain which the ministry only recently released to farmers. Its quality is recognized throughout the EU and Chinese markets, leading to a further boost in exports there.

“We’ve observed that the number of orders coming in from the European market is higher than in previous years, with buyers stocking up [on milled rice] during the Covid-19 outbreak. The market for Cambodian rice in Asean has also grown,” said Chhay.

The ministry report said the Kingdom now ships milled rice to 56 countries, with the largest importers being China and the EU nations.

It exports the grain to 24 EU countries, six Asean members and 25 other destinations.

CRF’s Yeng said rice exports are likely to end the year at around 800,000 tonnes with demand remaining high during the second half of this year.

“The fact of the matter is that the market is growing as it always has, with no slowdown in sight. Our key markets, such as Malaysia, are [importing milled rice] at a very good pace as they always have,” he said.

The Cambodia-China Free Trade Agreement (FTA), which is expected to be finalized by the end of the year will boost the Kingdom’s export volume and also draw more investment in raw material supplies and diversify the industrial sector, analysts said.

Ministry of Commerce secretary of state Sok Sopheak on Tuesday said that once the Cambodia-China FTA comes into effect, it will play a significant role in diversifying export markets and increasing shipments of the Kingdom’s agro-industrial products to the world’s largest market.

Sopheak, who is also the chairman of the working group handling FTA talks between Cambodia and China, was speaking at an Economic and Financial Policy Committee meeting concerning the negotiations. The committee is under the Ministry of Economy and Finance.

He said: “This agreement will also accelerate the process of regional and global economic integration, expanding Cambodia’s involvement in the value chain as well as maximizing its potential to draw in investors and serve as a production base for export to the Chinese market.”