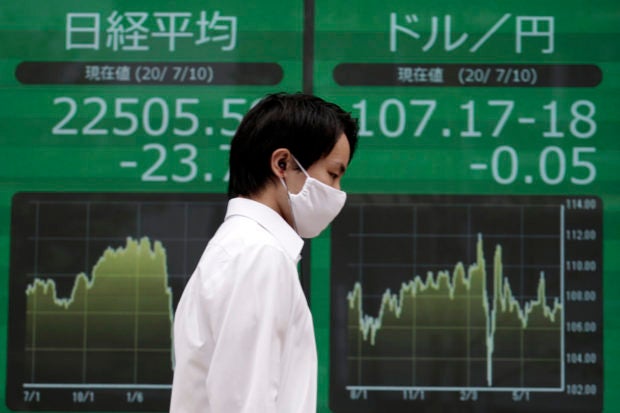 A man walks past an electronic board showing Japan’s Nikkei 225 index and currency exchange rate at a securities firm in Tokyo Friday, July 10, 2020. Asian stock markets followed Wall Street lower Friday on worries economic improvements might fade as coronavirus cases increase in the United States and some other countries. (AP Photo/Eugene Hoshiko)

Benchmarks in Shanghai, Tokyo, Hong Kong and Southeast Asia retreated a day after strong gains driven by the rise of U.S. tech stocks.

Global stock prices have recovered most of this year’s losses on optimism about a recovery from the coronavirus pandemic. But forecasters warn the rise might be too big and too fast to be supported by uncertain economic conditions.

“The market is concerned about the uptick in cases globally,” said Stephen Innes of AxiCorp. in a report. “Money is funneling into perceived safe areas of the market like tech, which should hold up broader indexes to a degree.”

Three out of four stocks in the S&P declined. The biggest losers were oil companies, airlines and other stocks that are most heavily affected by a reopening and strengthening economy.

The Nasdaq composite, dominated by tech stocks that are seen as relatively resilient to the pandemic, added 0.5% to a record 10,547.75.

U.S. government data showed 1.3 million workers filed for unemployment claims last week. That is down from 1.4 million the prior week and a peak of nearly 6.9 million in late March.

The improvements have helped validate investors’ earlier optimism that the economy can recover as states and other governments relax restrictions put in place earlier this year to slow the coronavirus pandemic.

Such optimism helped the S&P 500 rally back to within 7% of its record, after earlier being down nearly 34%.

But economists point to a troubling slowdown in the pace of such changes, including moderating declines in the four-week average of jobless claims.

Investors are worried that worsening infection levels in the populous U.S. states of Florida, Texas and California could derail a recovery. Some states are rolling back their reopenings, while others are ordering people arriving from hotspots to quarantine.