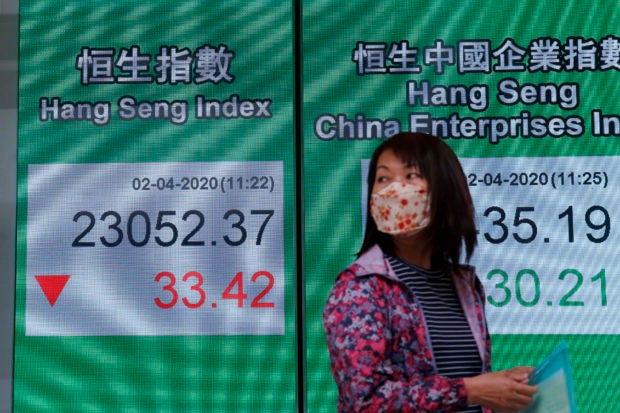 BEIJING  — Asian stocks were meandering Thursday after a White House warning that as many as 240,000 Americans might die of the coronavirus sent Wall Street tumbling and signs of the outbreak’s global economic cost increased.

A woman walks past an electronic board showing Hong Kong share index outside a local bank in Hong Kong, Thursday, April 2, 2020. Asian stocks were meandering Thursday after a White House warning that as many as 240,000 Americans might die of the coronavirus sent Wall Street tumbling and signs of the outbreak’s global economic cost increased.(AP Photo/Kin Cheung)

Benchmarks in Tokyo and Hong Kong opened lower but were trading higher by midday, and losses in early trading were smaller than Wall Street’s 4.4% overnight fall. Shanghai opened down but gained 0.3% at mid-morning while Seoul advanced 1.9%.

The U.S. warning added to anxiety among investors who are trying to figure out how long and deep this history-making global economic downturn might be.

“Fear, fear and more fear descended upon the market,” said Jingyi Pan of IG in a report.

Traders say markets will be turbulent until numbers of new cases decline, but Pan said that “still looks to be a distance away.”
The White House jolted financial markets with its announced Wednesday that anywhere from 100,000 to 240,000 Americans might die from the virus even if the country avoids shopping trips, eating in restaurants and other public activities through April.

Department store icon Macy’s has lost 74% so far in 2020. So much of its stock value has vanished that it was removed from S&P 500 index of big U.S. companies, effective Monday. It is being moved to the small-stock index.

U.S. investors were rattled by mounting evidence of the virus’s impact on major companies.

On Wednesday, Whiting Petroleum, one of the biggest shale oil drillers in North Dakota’s Bakken formation, applied for court protection from its creditors under Chapter 11 of the bankruptcy code.

Automakers also reported sharp drops in March sales, including a 43% plunge for Hyundai.

Mortgage applications tumbled 24% from a year earlier after open houses are all but shut down.

A report on Wednesday said private U.S. employers cut 27,000 jobs last month, though that was milder than expected. The survey used data from March before the number of people seeking unemployment benefits exploded to a record.

Economists expect the next batch of U.S. jobless claims, due to be reported Thursday, to blow past last week’s total of nearly 3.3 million initial claims. That was quintuple the prior record.

“The number of unemployed is set to surge and 1H growth will be heavily affected,” said Mizuho Bank in a report.

The number of infections is rising despite anti-disease controls that have shut down much of the global economy.

There are more than 911,000 confirmed cases worldwide, led by the United States with more than 206,000, according to a tally by Johns Hopkins University.

The U.S. Congress last week agreed on a $2.2 trillion economic aid package and the Federal Reserve promised to buy as many Treasurys as needed to keep credit markets running smoothly.

Legislators are collecting ideas for a possible new round of aid. President Donald Trump tweeted his support for a $2 trillion infrastructure package. But top Republicans in Congress say they first want to see how well their newly approved programs do.

In energy markets, benchmark U.S. crude gained 96 cents to $21.28 per barrel in electronic trading on the New York Mercantile Exchange. Brent crude, used to price international oils, rose $1.51 to $26.25 per barrel in London.