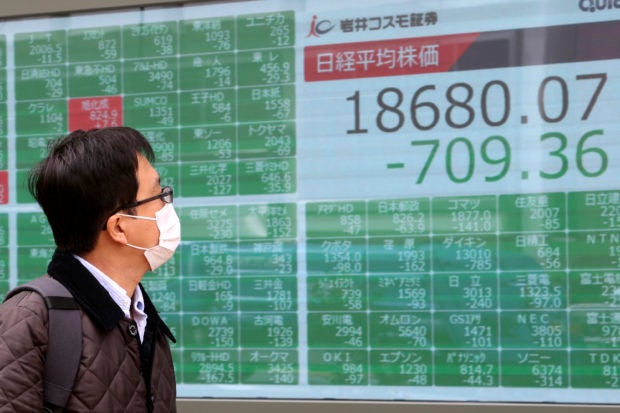 BEIJING  — Asian stocks were mixed Friday after Wall Street gained for the first time in three days on stronger oil prices despite enduring uncertainty about how long the global economic decline due to the coronavirus pandemic will last.

Tokyo and Seoul rose while Shanghai, Hong Kong and Sydney retreated. Oil prices gave up some of the previous day’s gains.

U.S. stocks jumped Thursday after the price of crude surged by 25% following President Donald Trump’s comment on Twitter that he expects Russia and Saudi Arabia to back away from their price-cutting war.

“As volatility slowly adjusts lower, it looks as if the extreme panic sell-off appears to be easing off as well,” said Stephen Innes of AxiCorp in a report.

Markets usually welcome lower energy costs for companies and consumers. But the abrupt plunge to below $20 this week from $60 at the start of the year triggered fears heavily indebted producers might default, causing more damage to credit markets.

The S&P 500 rose 2.3% to 2,526.90. It dropped as much as 0.6% earlier Thursday after the U.S. government reported more than 6.6 million Americans applied for unemployment benefits last week.

Roughly one of every 16 working Americans has applied for unemployment benefits in the last two weeks. Economists expect that to rise. That has many investors bracing for what may be the worst recession of their lifetimes.

Traders expect more volatility until numbers of new coronavirus cases begin to decline, which forecasters say might be weeks away.

The number of confirmed cases worldwide has topped 1 million, led by the United States with more than 236,000, according to a tally by Johns Hopkins University.

On Friday, U.S. crude declined 98 cents to $24.34 in electronic trading on the New York Mercantile Exchange. Brent crude, used to price international oils, shed 90 cents to $29.04 per barrel in London.