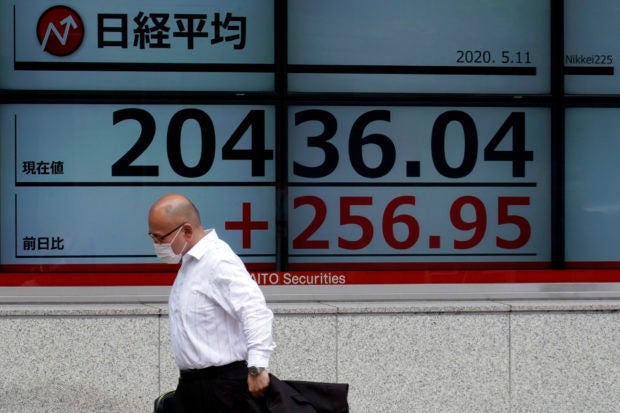 “While the argument that forward-looking market hopes of recovery should override backward looking economic gloom may not be groundless, it inevitably understates inherent fragilities and risks,” said Riki Ogawa of Mizuho Bank in a report.

Investors looked ahead to a week filled with data announcements including European factory output and trade, U.S. unemployment claims and retail sales and Australian jobs.

Markets got a jolt Sunday when one of Latin America’s largest airlines, Chile’s Avianca, asked a New York City bankruptcy court for protection from creditors while the carrier reorganizes amid a travel slump it said has cut revenue 80%.

Investors hoping for reassurance were looking ahead to an appearance by U.S. Federal Reserve chairman Jerome Powell on Wednesday.

“He is certainly not going to walk back any of the Fed extraordinary stimulus measures,” said Stephen Inness of AxiTrader in a report. “If anything, he could lay it down even thicker.”

In energy markets, benchmark U.S. crude lost 44 cents to $24.30 per barrel in electronic trading on the New York Mercantile Exchange. The contract gained $1.19 on Friday to $24.74.