Asian shares slip as global rally eases off the accelerator 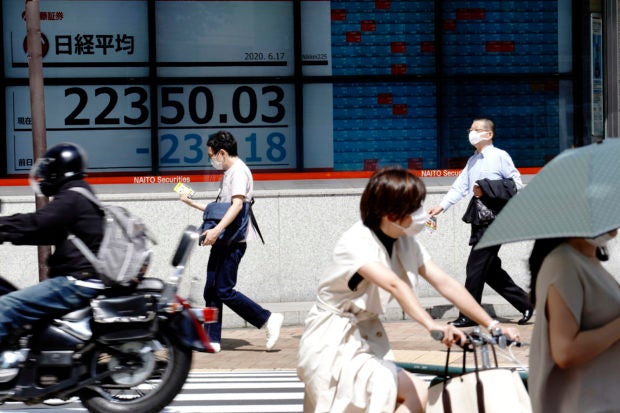 BANGKOK  — Shares fell Thursday in Asia after another day of wobbly trading on Wall Street as markets eased off the accelerator following their big rally.

Sydney’s S&P/ASX 200 skidded 1% to 5,934.80 after the government reported that unemployment surpassed 7% and would have been above 9% if the figure included people laid off and not officially looking for work.

“These are devastating unemployment numbers, they reveal the true pain and hurt that Australians are going through as a result of the coronavirus,” said the Australian Treasurer Josh Frydenberg.

“These are not just numbers. These are our friends, family members, workmates and neighbors,” he said.

The jobless data just added to the gloom, said Jeffrey Halley of Oanda. Eratic moves by North Korea and antagonisms between China and India in Kashmir have added to the unease.

“Covid-19 fears in Beijing and parts of the United States and geopolitical concerns in Asia continue to weigh on sentiment,” he said.

Stocks of smaller companies were weak, which is typical when investors are apprehensive about the economy. The Russell 2000 index of small-cap stocks fell 1.8%.

Markets have been trending upward this week amid hopes that the worst of the recession may have already passed, and a worldwide rally on Tuesday carried the S&P 500 back to within 8% of its record. But rising levels of coronavirus infections in hotspots around the world are also raising concerns that all the improvements could get upended.

Many professional investors have been warning that the S&P 500’s big rally of nearly 40% since late March has been overdone and that volatility is likely the market’s only certainty in upcoming months.

The market began its turnaround following a nearly 34% sell-off in February and March after the Federal Reserve promised massive amounts of aid for the economy. The central bank’s chair told Congress on Wednesday that it’s willing to keep interest rates at nearly zero and maintain its emergency lending programs.

But even though U.S. retail sales and employment have improved as businesses reopen, the road back to a full recovery from the coronavirus pandemic will be long and is full of potential setbacks.

Infections have been rising in various places, including Beijing, and in some U.S. states such as Florida and Texas.

Even if authorities don’t reinstate widespread lockdowns, the worry is that businesses and consumers could get frightened by new waves of infections and pull back on their spending.

The yield on the 10-year Treasury fell to 0.71% from 0.72% late Wednesday. It tends to move with investors’ expectations for the economy and inflation.

A barrel of U.S. crude oil for delivery in July slipped 46 cents to $37.50 per barrel in electronic trading on the New York Mercantile Exchange. It gave up 42 cents to settle at $37.96 on Wednesday. Brent crude, the international standard, slipped 31 cents to $40.40 per barrel.