Asian shares rise on hopes for drug to treat coronavirus 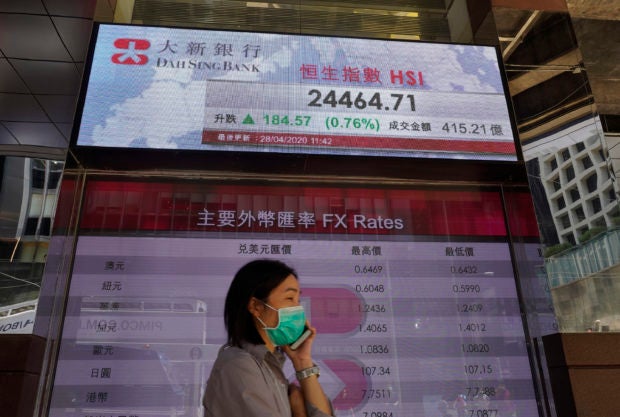 TOKYO  — Asian shares advanced on Thursday, riding a wave of optimism about a possible treatment for the coronavirus that set off a rally on Wall Street powerful enough to override data showing the U.S. economy had logged its worst quarterly performance since 2009.

On Wall Street, the upswell of hope about curbing the virus outbreak was so strong that investors completely sidestepped the report showing the U.S. economy shrank at a 4.8% annual rate in the first three months of the year.

The S&P 500 vaulted 2.7% higher, extending a rally that’s brought the U.S. stock market to the brink of its best month in 45 years.

The spark for Wednesday’s rally was a report that the experimental drug remdesivir proved effective against the new coronavirus in a study run by the National Institutes of Health. The nation’s top infectious diseases expert said the drug reduced the time it takes patients to recover, and it raised hopes that life around the world may eventually tiptoe back toward “normal.”

“With the refreshed optimism on the Covid-19 end, Asia markets can likewise be seen charging ahead into what will be the end of week for many markets in the region.” said Jingyi Pan, a market strategist for IG in Singapore.

Also boosting sentiments were some data out of China that appeared to show recovery from the economic damage over the virus outbreak may be coming gradually.

“What you’re finding now is you have this debate between optimism and realism,” said Adam Taback, chief investment officer for Wells Fargo Private Wealth Management.

The Federal Reserve said Wednesday that it expects the health crisis to weigh on the economy “over the medium term,” as it promised to keep in place massive amounts of aid and interest rates at nearly zero. Oil prices, bonds and other markets besides stocks have also been dominated in recent weeks by worries about the economic impact of the virus outbreak.

“Everything except equities is telling you things are not great,” Taback said. “This market is overly optimistic.”

Job losses have exploded since early April, as layoffs sweep the nation following widespread stay-at-home orders, and economists expect to see even worse numbers for the second quarter of the year.

The first quarter figure was “merely the tip of the iceberg,” said Michael Reynolds, investment strategy officer at Glenmede.

But stocks have been rallying over the last month as investors look beyond the current economic devastation, focusing instead on the prospect of economies gradually reopening.

But what got the 31.4% rally for the S&P 500 started in late March was massive aid from the Federal Reserve and Congress. The Fed on Wednesday said it wouldn’t be pulling back on the aid anytime soon.

The smallest stocks have shown the largest degree of optimism. The Russell 2000 index of small-cap stocks jumped 4.8% Wednesday and is up 10.4% this week alone, more than double the gain for indexes of bigger stocks.

But big tech and communications stocks helped lead the rally Wednesday after Google’s parent company said its revenue was stronger than expected in the first three months of the year. Alphabet jumped nearly 9%, which lifted communications stocks in the S&P 500 by 5% for one of the biggest gains among the 11 sectors that make up the index.

Many professional investors are skeptical of the U.S. stock market’s big rally. There’s still a lot of uncertainty about how long the recession will last. Even if there is a quick rebound for the economy and profits, it may take a while for households and businesses to get back to how things used to be.

“My concern is that the market is starting to get a little bit more focused on the rewards and less focused on the risks right now,” said Sal Bruno, chief investment officer at IndexIQ. “Maybe investors are getting a little too enthusiastic.”

“I don’t think you just flip the switch and everybody goes back to work right away,” he said.

Oil prices are continuing their extreme swings after a collapse in demand has sent crude storage tanks close to their limits.