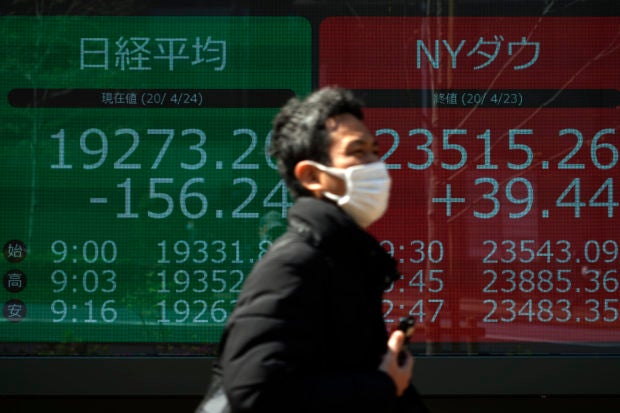 TOKYO  — Asian shares are lower Friday after an early rally on Wall Street suddenly vanished, the latest example of how fragile the hopes underpinning the stock market’s monthlong recovery are.

A man wearing a mask to help stop the spread of the new coronavirus walks past an electronic stock board showing Japan’s Nikkei 225 and New York Dow indexes at a securities firm in Tokyo Friday, April 24, 2020. Asian shares are lower Friday after an early rally on Wall Street suddenly vanished, the latest example of how fragile the hopes underpinning the stock market’s monthlong recovery are.(AP Photo/Eugene Hoshiko)

Investor sentiment was back on fragility mode as focus again shifted to the economic damage the world was likely to suffer because of the pandemic, says Prakash Sakpal and Nicholas Mapa, economists at ING.

“Investors will continue to be monitoring developments on the COVID-19 front with a setback on clinical testing for a treatment to the virus. Meanwhile, the U.S. passed a fresh round of stimulus while oil prices continued to inch up slightly,” they said in a commentary.

On Wall Street, the S&P 500 flipped between gains and losses and ended the day down 0.1%. It’s a microcosm of the extreme swings that have gripped markets for months, as investors struggle to set prices for where corporate profits and the economy will be months from now.

The S&P 500 skidded by a third from its record in February until a month ago, and since then has roughly halved its losses on a series of tenuous hopes — of businesses reopening, of government aid to temper the economic pain and of possible treatments for COVID-19.

A report from the Financial Times on Thursday afternoon undercut that third hope. It said a potential antiviral drug flopped in a clinical trial, citing documents published accidentally by the World Health Organization.

However, study said the sample size was too small to draw scientifically valid conclusions and ended early. The Foster City, Calif.-based company behind the drug, Gilead Sciences, said the data represented “inappropriate characterizations” of the China study.

Gilead’s shares flipped from a 3.3% gain to a 4.3% loss after the report. It also helped topple the market.

“It should be expected — even as we are optimistic, and we see signs of progress in treatment, testing and vaccines — that there’s going to be some forward and some backsliding,” said Nela Richardson, investment strategist at Edward Jones. ‘]

She said investors are still encouraged by signs of progress in some places that are seeing fewer new patients and deaths.

“The risk is that these fundamentals that we’re seeing now that are dastardly, just terrible and reflective of the economy really going into a sudden stop, last longer than what the markets currently anticipate,” she said. “That uncertainty will cause volatility, even if the overall trajectory in the market is positive.”

Among the dastardly numbers arriving Thursday: Preliminary data on manufacturing and services activity in Europe and the United States came in even weaker than economists expected, as did a report on sales of new U.S. homes. The headliner, though, was job losses. Another 4.4 million U.S. workers filed for unemployment benefits last week, raising the total over the last five weeks to 26 million, or roughly one in six U.S. workers.

Analysts said investors may have found some encouragement in a dip from the prior week’s 5.2 million or were looking past the dismal data because they fully expected it.