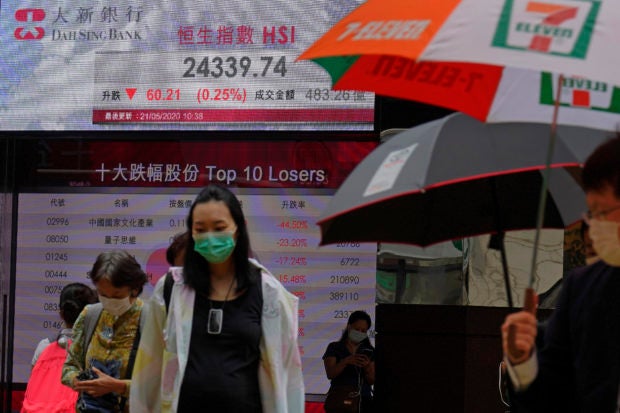 HONG KONG, China – Most Asian markets rose Monday as a further opening up of economies from lockdown offset worries over worsening China-US tensions, while Hong Kong sank again after the city was rocked by protests at the weekend over a controversial proposed security law.

While Donald Trump has limited travel from Brazil as the Latin American country sees deaths and infections spiral, traders were focusing on the more upbeat news that governments from Asia, across Europe and around the US were lifting economy-shattering shutdowns.

Japan’s prime minister is expected later Monday to lift a state of emergency in Tokyo, after last week lifting it for the western Osaka region, while Spain and Italy are preparing to reopen their borders to kickstart their crucial tourism sectors.

Greece, Germany and the Czech Republic are also on course to allow bars and restaurants to begin serving again, while primary schools in parts of England are set to restart from next month.

“Global investors are continuing to map the reopening of global economies to the overall risk narrative,” said Stephen Innes of AxiCorp. “The global stock markets are moving higher with positive changes in mobility data. According to recent mobility data, the global economy has taken a giant step toward normality in the last week.”

Tokyo went into the break more than one percent higher, while Sydney and Wellington were up a similar amount. Seoul and Taipei were also higher.

However, Hong Kong sank 0.8 percent — having dived more than five percent Friday — after violent weekend clashes in the city fuelled by China’s legislature introducing a proposal to impose a security law that would suppress its pro-democracy movement.

The protests were the biggest since last year’s, which battered the local economy for months.

The move has also raised concerns about Hong Kong’s future as a financial hub, with the US already passing a bill that would strip the city’s preferential trading status if it no longer enjoys autonomy from mainland China.

It also turned up tensions between Washington and Beijing, already strained by Trump’s barracking of China over its role in the spread of coronavirus and warnings about fresh tariffs.

On Friday, the US announced sanctions against a Chinese government institute and eight companies for human rights violations against Uighurs and other minorities in China’s western Xinjiang region.

On Sunday, China’s foreign minister said the US was pushing relations with between the two to “the brink of a new Cold War”.

“One big threat to the recovery in markets is the escalating war of words between the US and China,” said Shane Oliver at AMP Capital Investors.

But he added: “The main focus will likely remain on continuing evidence that the number of new COVID-19 cases is slowing in developed countries, progress towards medical solutions, the reopening of economies and signs that economic activity is picking up.”

While observers expect Trump to continue his attacks on China heading into November’s presidential election, analysts do not expect him to take action that threatens the trade detente with Beijing.

Increasing worries about a standoff between the world’s economic superpowers weighed on oil prices, though they continue to win support from the easing of lockdowns and huge output cuts by key producers.