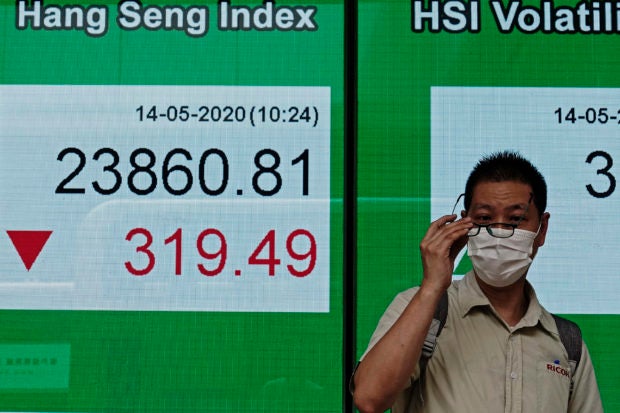 Wall Street rallied back from a sharp morning drop on Thursday, led by a resurgence for some of the year’s most beaten-down stocks.

A man wearing face mask walks past a bank electronic board showing the Hong Kong share index at Hong Kong Stock Exchange Thursday, May 14, 2020. Asian shares declined Thursday on pessimism about life getting back to normal soon amid the coronavirus pandemic, even as Japan prepared to let businesses reopen in some regions. (AP Photo/Vincent Yu)

The S&P 500 climbed 1.2% in another scattershot day of trading, with many stocks flipping from the bottom of the leaderboard to the top following a few sharp reversals in momentum.

The zig-zag trading followed up on earlier losses for Asian and European stocks, while Treasury yields sank in a sign of increased pessimism.

It’s the latest wobble for Wall Street, which has been wavering for weeks as it digests gargantuan moves the market made earlier this year, first down more than 30% on worries about the coming recession and then up more than 30% on hopes for a relatively quick rebound.

Trading has been particularly erratic this week, as investors rethink bets that the reopening of economies around the world will allow for a relatively quick return of growth.

Another possible flare-up in tensions between the world’s largest economies is also hitting markets, with comments from President Donald Trump about China further weighing on them Thursday.

“Instead of it being a stock market where everything moves in the same direction — up and down — whether it’s large, small, growth or value, it’s more of a market of stocks of individual companies,” said Tom Martin, senior portfolio manager at Globalt Investments.

“What you’re seeing is this churning within the market, but not a lot of broad movement in the total market,” he said.

Thursday’s turnaround was powered in large part by a rally for stocks that have been pummeled for much of this year: banks.

Financial stocks in the S&P 500 jumped 2.6% for the biggest gain among the 11 sectors that make up the index. Wells Fargo rose 6.8%, and Bank of America added 4%. Through much of this year, investors have sold bank stocks on worries that low interest rates and the severe recession will mean less profit for making loans.

Energy stocks, another corner of the market that’s been hit hard this year by recession worries, also climbed. They benefited from a rise in the price of oil after the International Energy Agency gave a new forecast for oil demand this quarter that wasn’t quite as bad as its earlier one.

Before the recession hit, U.S. stocks quickly lost just over a third of their value as investors anticipated an avalanche of layoffs hitting the economy. Those fears have turned out to be true, and a report on Thursday showed that nearly 3 million U.S. workers filed for unemployment benefits.

That brings the total to roughly 36 million in the two months since the pandemic caused widespread orders for people to stay at home and businesses to shut down.

But stocks began climbing in late March after massive amounts of aid promised by the Federal Reserve and Capitol Hill convinced markets that the worst-case scenario of a financial crisis wouldn’t be happening. Gains accelerated on hopes that the recession, while severe, could be relatively short and that the economy could resume its growth as shutdown orders lift.

Many professional investors have warned the rally was overdone, though, given how much uncertainty exists about how long the recession will last. On Wednesday, Federal Reserve Chair Jerome Powell warned this could become a prolonged downturn, while the top infections diseases expert in the U.S. said Tuesday that reopening the economy too quickly could backfire and lead to more deaths.

Recently, worries about renewed U.S.-China tensions have also weighed on markets. A bruising trade war between the two had dragged on the global economy before the pandemic hit.

“We have all the challenges internally with the economy being shut down, but us getting into a conflict with China adds an additional dimension of uncertainty,” said Mark Hackett, chief of investment research at Nationwide.

The yield on the 10-year Treasury fell to 0.62% from 0.64% late Wednesday. It tends to fall when investors are downgrading their expectations for the economy and inflation.

Analysts say they expect the market to remain in a wait-and-see approach for weeks as investors gauge how economic reopenings underway are going. Investors want to see if second waves of coronavirus infections occur if governments lift their restrictions on businesses too soon.