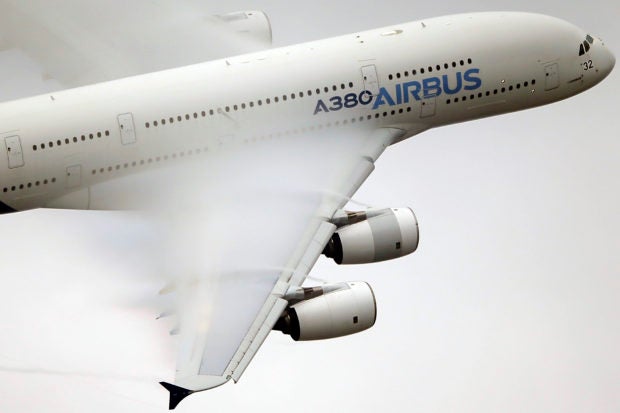 In this June 18, 2015, file photo, vapor forms across the wings of an Airbus A380 as it performs a demonstration flight at the Paris Air Show, Le Bourget airport, north of Paris. The France-based planemaker Airbus releases quarterly earnings early Wednesday, April 29, 2020, at a time of unprecedented upheaval in the aviation industry caused by the spreading the coronavirus and travel lockdowns. (AP Photo/Francois Mori, File)

PARIS — Airbus reported 481 million euros ($515 million) in losses in the first quarter, put thousands of workers on furlough, and sought billions in loans to survive the coronavirus crisis – and its CEO said Wednesday the aviation industry’s unprecedented troubles are still at an “early stage.”

Even after virus-related travel restrictions eventually ease, Chief Executive Guillaume Faury acknowledged it will take a long time to persuade customers to get back on planes. Just how long, he can’t predict.

Airbus executives expressed hope Wednesday that jet deliveries stalled by the virus could start picking up in the second half of the year. But they refused to issue long-term guidance given that the virus is still spreading, thousands of jets are grounded worldwide and governments are reluctant to relax travel restrictions.

“We are in the gravest crisis the aerospace industry has ever known,” Faury said. “Now we need to work as an industry to restore passenger confidence in air travel as we learn to coexist with this pandemic.”
After warning workers that the European planemaker is “bleeding cash,” Faury said Airbus will study “resizing” the company after the virus crisis.

Already 3,000 Airbus workers in France are on temporary unemployment and the number is expected to grow. In addition, 3,200 workers in the U.K. are on furlough, and negotiations are underway to put thousands of German workers on short work plans.

Airbus reported a 15% drop in revenues to 10.6 billion euros in the first quarter.

Shares in Airbus and Boeing have dropped some 60% this year, and airlines around the world have sought multibillion-dollar government bailouts to survive.