Age rules in reopening of businesses in GCQ areas ‘not well thought of’, says Ecop head 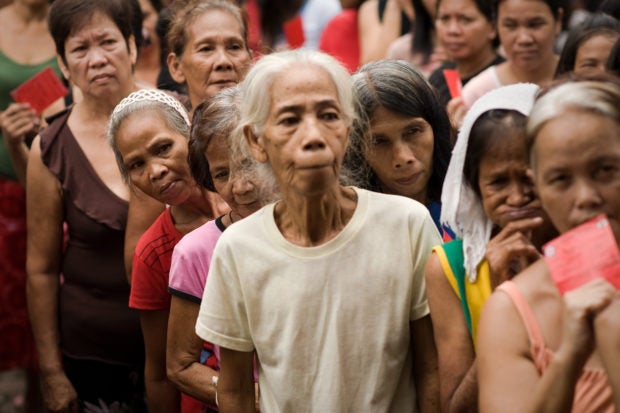 The head of the country’s biggest employers’ group on Wednesday (April 29) warned that senior citizens could lose their jobs permanently under terms being imposed by the government for the reopening of businesses.

Sergio Ortiz-Luis Jr., president of the Employers’ Confederation of the Philippines (Ecop), said government rules for the reopening of businesses appeared to discriminate against workers who are senior citizens and those aged between 18 and 20.

Ortiz-Luis said workers, who are senior citizens, would be made “last priority” by employers because of age restrictions imposed by the government.

The rationale for keeping senior citizens from returning to work is they were supposed to be more vulnerable to contracting coronavirus and getting sick with COVID-19.

But Ortiz-Luis said it appeared to be a discriminatory rule.

“Don’t discriminate against them because you think you’re protecting them,” Luis said of the rule preventing seniors from getting back to work.

The same could happen to workers in the age group 18-20, said Ortiz-Luis. In areas under general community quarantine (GCQ), only workers between 21 and 59 years old are allowed to leave home, a rule that the Ecop head stopped short of calling ageist, or prejudice based on age.

“By that simple regulation, you blacklist the 18 to 20 and the senior citizens from work, which can be permanent,” Ortiz-Luis, 75, said in a phone interview.

May would mark the first month that many businesses would find themselves in uncharted territory, as the government allows those deemed to be not immediately essential to operate in GCQ areas.

While senior citizens are widely believed to be at higher risk of COVID-19 complications, Trade and Industry Secretary Ramon Lopez previously said in a television interview that those aged below 21 are “usual carriers” of coronavirus.

The Duterte administration was supposed to release a minimum health protocol that companies would be required to follow, which would prompt businesses to make adjustments they had never done before the time of COVID-19, such as mandatory face masks.

Presidential Spokesperson Harry Roque previously said the protocol should have come out on April 27, but the guidelines have not been released yet as of late afternoon of April 29. Either way, Ortiz-Luis said businesses would not immediately bring back their entire workforce.

He estimated that only 50 percent of a company’s workforce would go back to work while the company is adjusting.

“This will not include those aged [between 18 to] 20 and senior citizens. If they can’t work in the next six months, why do you expect them to be able to work in the next one year?” he said.

There is no available data on the number of workers aged 18 to 20 as well as those aged 60 and above.

The numbers suggest a significant part of the workforce would be impaired by the government’s age restrictions.

Employers would feel an impact, too. Many business owners, especially those in small companies, are senior citizens. Some of them, Ortiz-Luis said, might not feel confident running their companies at home, when they should be at the office to oversee operations.

He also cited what he said was double standard in government, especially since most, if not all, Cabinet members and President Rodrigo Duterte himself are senior citizens who— despite the risks — still go to work every day.

“They say senior citizens are endangered. Fine. But you have to help them, not make their lives difficult,” said Ortiz-Luis.